The city of Sandpoint and consultant firm Bernardo Wills Architects hosted a public workshop Nov. 25 on the future design of War Memorial Field. 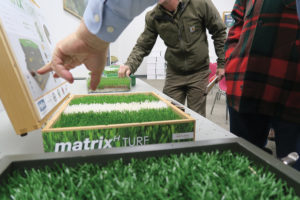 The gathering at City Hall drew about 40 attendees, mostly from the surrounding south Sandpoint neighborhood, who viewed examples of artificial turf surfaces and infill, took in a presentation from city staff and contractors, and asked questions about the project over the course of about two hours.

Landscape architect and Bernado Wills Principal Dell Hatch opened the meeting by noting the number of neighborhood residents in attendance, telling them that the purpose of the workshop was to gather their concerns, perceptions and issues with the project.

“We’re going to take that input and do the best we can to address those,” said Hatch, whose Spokane-based firm was recently awarded $300,000 by the Sandpoint City Council to provide design services at the field, including the installation of artificial turf to replace the current grass surface.

Public input included concerns about noise and light impacts on surrounding homes, construction-related conflicts with American Legion baseball and the Sandpoint High School graduation ceremony, and what might happen with the war memorial located at the northeast corner of what is now the baseball field.

Hatch assured attendees that “we think it’s important that memorial stays just as it is,” while there’s little that can be done to accommodate early-season baseball or graduation this year, especially considering the field has to be ready for use by the Festival at Sandpoint no later than July 30, 2020.

“There’s no way that this project won’t displace Legion,” Hatch said. “For one year.”

Meanwhile, Sandpoint Parks and Recreation Director Kim Woodruff said the class of 2020 graduation may instead take place at City Beach.

Longtime resident and former state legislator George Eskridge expressed frustration that so much of the Memorial Field planning has turned on accommodating the Festival.

“The Festival keeps encroaching on our time to have state and district [baseball] tournaments on Memorial Field,” he said.

“And I hate to bring this up, [but] we don’t even know if the Festival’s even going to be here anymore,” Eskridge added, referring to ongoing litigation between the city and Bonner County over the legality of the Festival’s weapons ban. “What happens if the Festival doesn’t prevail? Then what happens to all this planning?”

Hatch said work on the combination football, soccer, lacrosse, softball and baseball fields, along with construction of batting cages, bullpens and accommodations for the Festival, would all fall under Phase I of the project, which is set to conclude July 30. Phase II focuses on restructuring and expanding the parking lot on the east side of the field.

The conceptual plan as it stands calls for about 96 spaces, up from 44, including diagonal boat parking. Achieving that design, however, could mean the removal of a copse of trees along the eastern edge of the parking lot, to be replaced by a barrier wall. That idea drew heated responses from several attendees at the workshop.

“For parking for functions … that natural barrier for sound and sight is a beautiful thing; those trees are maybe 100 years old,” said one neighbor, “that’s what blocks the view and sound of activities down there; that’s what keeps our neighborhood a neighborhood.”

Other attendees doubled down on pushback against taking out trees to make room for parking — either on the east side of the existing lot or another concept that would see parking replace the tennis courts at Lakeview Park.

“You’ve already taken out so many trees. … You’re taking all the nature out of the park,” said one resident. “

“You’re affecting our neighborhood’s only park and putting more parking,” echoed another. “You’ve already taken out 30 trees [behind the grandstand].”

Hatch was quick to respond that “we’re not saying this is going in here, it was a big idea that was discussed.”

The workshop grew more heated as it entered its second hour, with a few attendees again questioning the controversial decision to go with artificial turf on the field, which was approved in a tie-breaking vote by Mayor Shelby Rognstad at the Oct. 16 City Council meeting.

“That decision’s been made,” Woodruff said in an effort to redirect the discussion toward conceptual input.

“We wouldn’t be having this meeting if we didn’t want to listen,” he added.

Outlining next steps, Hatch said Bernardo Wills intends to refine its design concepts and develop them to 30% completion, refining its costs along the way, and will bring the results to the city by Jan. 2, 2020. Based on city feedback, the company will rework its design drawings to 95% completion for delivery to the city on Feb. 7. The project, estimated at $4 million in total cost, is slated to go out to bid Feb. 18.

“There will probably be very few opportunities to change direction as we refine it,” he said.

According to City Administrator Jennfier Stapleton, concepts for all parks, including Memorial Field, are available online at sandpointidaho.gov/your-government/engagesandpoint and will be made available at City Hall as they are developed.

“Before this goes out to bid, it comes back to council to have final approval and to approve going out to bid,” she said, referring to its Thursday, Jan. 2 meeting.

“I do hope you take our inputs and I hope that you don’t radically go change the concept you’ve presented here,” said one attendee.

“No, I think we’re looking at staying with the concept,” Stapleton responded.