Vows to push back against ‘conspiracy theories, fringe views and cheap political theater’

As the 2022 Idaho legislative session approaches, with lawmak-ers expected to convene Monday, Jan. 10 in Boise, the pushback against the “extremism” of some members is already ramping up. 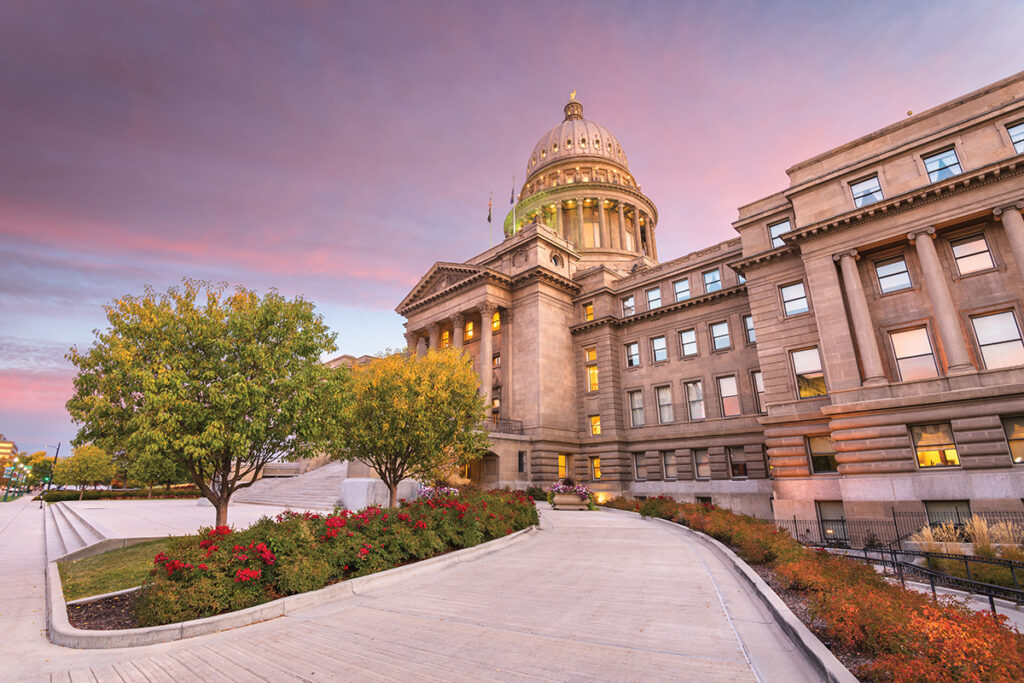 The Idaho State Capitol in Boise at dawn. Courtesy photo.

In a media release Dec. 14, a group of prominent former Idaho officials announced the formation of the Take Back Idaho Commit-tee — a citizens’ effort “to restore reason and responsibility to the Idaho Legislature.”

Blackfoot rancher and former Idaho Cattle Association President Jennifer Ellis will serve as chair of the committee, stating in the announcement that, “the recent disruptive legislative sessions have pointed to the desperate need to replace dangerous extremists in the Legislature.

“Instead of putting forward positive ideas to improve the everyday lives of Idahoans, these politicians waste valuable time and taxpayer money,” she added. “This vocal minority has replaced civility and common sense with conspiracy theories, fringe views and cheap political theater.”

The committee singled out recent efforts to tighten requirements for bringing citizen initiatives to the ballot — efforts that have been roundly rejected by the courts as unconstitutional — as well as furor over alleged (though so far unproved) “student indoctrination” in Idaho schools and systematic underfunding of public education.

Recent legislative sessions, especially amid the COVID-19 pandemic, have generated much sound and fury. In 2020, far-right conservative activist — and current Republican gubernatorial candidate Ammon Bundy — had to be trespassed from the Statehouse more than once for disrup-tive behavior, while others on the right-wing of the Idaho GOP tried and failed to assemble a quorum that summer to oppose and over-turn Republican Gov. Brad Little’s coronavirus orders.

The 2021 Legislature then sat for an historic length of time, from January until May, followed by another failed attempt at a special session in August. The House and Senate officially reconvened for a three-day special session in Novem-ber — again targeting vaccine and testing mandates — but resulted only in a strongly worded letter of opposition to President Joe Biden.

“The extremists have tried to strip local control, undermined our public education system and made our great state a laughing-stock in the eyes of the nation,” Newcomb stated.

This isn’t the first foray by former Idaho officials to raise the alarm about what they consider to be political elements — partic-ularly within the Idaho GOP and the Idaho Freedom Foundation — that are detrimental to the steady governance of the state.

In March, Jones and other Idaho legal experts announced the forma-tion of the Committee to Protect and Preserve the Idaho Constitu-tion, which aimed to expose and oppose legislation before it landed in the courts as unconstitutional.

The new Take Back Idaho Committee leveled most of specific criticisms against the IFF, which describes as its mission, “to make Idaho into a Laboratory of Liberty by exposing, defeating, and replacing the state’s socialist public policies. Many lawmakers and Idaho politics observers have long said the organization operates more as a right-wing lobby group with outsized sway over a number of ultra-conservative legislators.

“Too many of the GOP legisla-tors have become ardent followers of the Idaho Freedom Foundation, which thrives on creating discord and havoc,” Geddes stated. “They have lost sight of the fact that they were elected to represent the people, not a dark-money think tank.” What’s more, added Ysursa, who ran Idaho’s elections as secretary of state from 2003 to 2015, the IFF “has irresponsibly raised questions about Idaho’s election integrity.”

The IFF, for its part, has labeled critics such as Newcomb “statists” and doubled down on its various campaigns against so-called “critical race theory” in schools, as well as jabbed at higher education and blasted lawmakers for “fail[ing] to protect Idahoans from forced vaccina-tions” and “medical tyranny.”

The Take Back Idaho Com-mittee also announced it will undertake a program of outreach to voters highlighting “the disruptive actions of the IFF and its legislative followers,” as well as “oppose candidates who refuse to act responsibly.” Ellis stated the committee will support those “dedicated to educat-ing our children, working together to solve our chronic problems, and restoring a sense of community and common purpose in Idaho.”