A profile of Sandpoint’s own Eric Ridgway 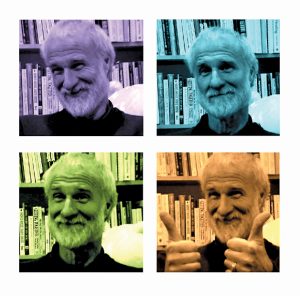 “I really love my job,” says local councilor Eric Ridgway. “I see people healing, growing, making progress. If I won the lottery … I would show up to work tomorrow, next week, next year.  I get to contribute to the world through the community I live in.”

Ridgway has lived and worked as a counselor in Sandpoint since 1991 and calls it his “dream place to work.” He is involved with many different community projects including hosting PFLAG events.

“I like a deep emotional connection,” he says. “I think all of us are starving for deep connection. If we have close connections in our life the quality of our life is so much better. I believe everyone is capable of loving themselves and connecting with others if they have been given enough support. I want everyone to have the ability to get that support, and it doesn’t have to be counseling. I believe in healing through connection.”

In his youth Ridgway was depressed often; he thought that it was normal to want to die.  Swimming was what helped him get out of his funk. As he improved physically, he knew he could improve emotionally, too. He didn’t make the swim team his sophomore year of high school, but he worked hard and made the team his junior year. He swam through college where he was team captain his junior and senior year.  “I wasn’t the best swimmer, but I was REALLY enthusiastic,” he said, adding that swimming helped save his life.

Many people know and respect him for the Long Bridge Swim, his personal vision that became a reality in 1994 (with the help of kayaking buddies), and a community event in 1995. Nowadays it is a major event attracting thousands of people to the community.

Prior to his counseling degree, Ridgway designated most of his 20s to the study of rocks.  He got his bachelor’s degree, master’s degree and a pinch of his Ph.D. in geology.  Ridgway and his wife have hundreds of rocks collected over the years, that are “part of the family,” he says.

After a year long trip to Africa, Ridgway changed directions. “Africa changed my heart,” he says.  After that, he knew he  needed to study and work with people rather than rocks.

People, rocks and everything in between: Ridgway is a lover and advocate for animals and nature. He and his wife co-founded the Sandpoint Vegetarians, which has held monthly potlucks and informative meetings for nearly a decade. He also held an art show I had the pleasure of being involved with titled “Compassion for Animals.” He says that his cardiovascular health really improved as a result of becoming a vegetarian, cycling faster in his 40s than in his meat-eating 30s. He historically enjoyed eating meat, but when he researched the treatment of 99 percent of the animals raised for meat, he became a vegetarian.

“What I am spending a lot of focus on is learning about neuro-therapy,” he says. “Neuro-therapy is new to me, but it is a tool that has been around, in some form, since the 1950s. It is a form of biofeedback.”

He explains that by seeing the visual diagrams of our heart’s rhythms we can consciously change them.

“We can lower our heart rates willfully and our skin temp willfully,” he says. “Monks have been doing this for thousands of years. … Nuero- therapy is looking at the brain waves and putting them on a screen, so we can visualize it and change it. The VA (Veteran’s Administration) is using it for depression, anxiety, PTSD …  I want to add this to my toolbox. I want to open a clinic like that here.”

Currently, a person must drive to Spokane to get a “brain map.”  “This is very scientific, and I am doing a lot of research at this time,” says Ridgway, referring to his stack of books.

“Some people are like rhinos,” Ridgway said to my very sensitive youngest son, (Ridgway is awesome with kids) “They are tough and thick skinned. … They tromp around and not very much affects them. The world expects us to be rhinos sometimes. …  Other people are like frogs, with thin skin, and they are much more sensitive …  It is okay to have thin skin. It is good to be sensitive.”

Ridgway wants to be informed of current events, but he is sensitive to “drowning in the negative,” so he really limits his news watching.

“When fear becomes big enough, people can become fear-based… they see different as bad, something to be shunned and defeated. Different is an opportunity to expand our understanding. I would like to see greater understanding and less fear-based interactions, not only in our community, but the whole world.”

Ridgway continues: “Diversity makes life fun! I want to live in a world and community with huge diversity!  I celebrate people being different.  Different ideas make discussion more lively. I want diversity of culture, custom, philosophy, ways of making music, ways of dancing.  … I travel because I seek diversity.”

“I think Sandpoint is amazing and we could be even better,” he concludes “With people immigrating into Sandpoint we are seeing different skin colors, and I love to see more of that.  We need more diversity. I would like to see more celebrations across religions.  We are brothers and sisters and we can enjoy each other.”