Celebrating 100 years of Jazz in America

Jazz is hard and is America’s only indigenous art form. Serious Jazz is even harder, is a very difficult music to appreciate and requires a great deal of effort to learn its language. The world of jazz is painted with a very broad brush so when I say “serious jazz” I am referring to the likes of Charlie Parker, Thelonious Monk, John Coltrane, Cecil Taylor, Sun Ra, Albert Ayler, and Ornette Coleman just to name a few. The music of these people is not for the, lazy, timid and/or musically challenged. And it scares the shit outta most people.

For a personal example, when I first listened to a Cecil Taylor vinyl in a Tower Records listening booth in 1964, it scared the hell outta me. CT’s music made me so nervous I had to turn it off after about 30 seconds. But I didn’t give up. A few months later I gave the record another chance and it clicked. In the meantime I had been listening to some of the others listed above thereby improving my musical vocabulary. 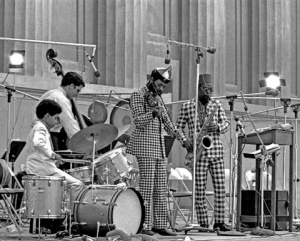 I am the first to admit that when it comes to music, I am a snob. I consider jazz to be the greatest, most important music ever created. Over the past 100 years jazz has had, when it comes to musical ideas and instrumental technique, the greatest influence on all other music than any other musical form. If jazz had never existed all pop and classical music created over the past 100 years would sound very, very different. It would be much like it was before the invention of jazz 100 years ago.

In so many ways jazz has shown how it can be done.

For 100 years now jazz musicians have been THE musical pioneers. For example, because of Louis Armstrong classical composers started writing differently for the trumpet.

Beginning with Armstrong there has been in jazz an explosion of originality and creativity that no other musical genre has even come close to equaling in such a short period of time.

And the period beginning with Bird, Monk and Diz (bebop), through Miles, Trane, Ayler, Sun Ra, CT and Ornette into the 80s saw, because of these people, the greatest period of musical creativity this planet has ever seen. (CDs of every musician mentioned can be found at the East Bonner County Library.)

This past June 11th mankind lost Ornette Coleman one of the most important musicians and composers this planet has produced, he was 85.

Both Leonard Bernstein (director of the New York Philharmonic) and Gunther Schuller declared Ornette Coleman to be a genius. In fact Mr. Schuller, who was involved with The Festival at Sandpoint for several years, wrote the liner notes for many of Coleman’s albums.

Coleman received dozens of awards over the years for his work and playing (on alto and tenor saxophones, violin and trumpet) including a Pulitzer in 2007 for his album “Sound Grammar”, a Recording Academy Lifetime Achievement Award in 2007 and in 2012 the Library of Congress added his 1959 Atlantic album, “The Shape of Jazz to Come”, to the National Recording Registry. In 2015 the album was then inducted into the Grammy Hall Of Fame.

You Deadheads may be interested to know that Ornette Coleman sat in with the Grateful Dead (Oakland Coliseum Arena – Feb., 1993) and Jerry Garcia played guitar on three tracks from Coleman’s 1988 album Virgin Beauty.

I first learned of Ornette Coleman around 1964 and was privileged to see him in concert on three occasions.

Our library has five of Ornette Coleman’s CDs including his Grammy Hall Of Fame album.