The Cedar Street Bridge is under new ownership following its sale to a Florida investor. 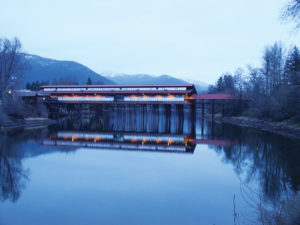 Realtor Jeff Bond confirmed this week that he negotiated a sale with the investor, who approached Bond with interest in the property. According to Bond, the buyer has worked on similar projects in the past, and he sees potential in the historic structure.

“I think he’s got plenty of capital, and what he wants to do is update, renovate and attract new tenants,” Bond said.

The Cedar Street Bridge houses staples of the downtown business community, ranging in its offerings from restaurants to gift shops to boutiques. The bridge was constructed in the 1930s to serve pedestrians and motorists until the 1970s, when it was in danger of becoming a derelict structure. With a little forward thinking, it was transformed in the 1980s into a community gathering place and market, a purpose it continues to serve today. Over the years, it has held many shops, restaurants and retail spaces, including a stint in the 1990s and 2000s as Coldwater Creek’s primary Sandpoint retail outlet.