Cedar construction to advance after Fourth of July

Cedar Street businesses between Second and Third avenues, rejoice: construction is moving on to the next block. 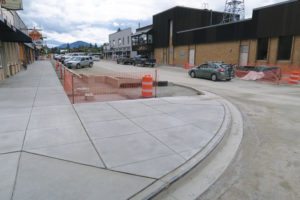 Work has advanced smoothly over the past few weeks. At the end of July, crews focused on grading the roadway and placing sidewalk on the south side of Second and Third. The concrete pours were staggered to account for the joints in the sidewalks, which were opened to pedestrians within 24 hours of placement.

“Our on-site personnel are in direct contact with affected businesses,” Stapleton said in a construction update to local businesses. “Access to all business entrances will be provided by the end of shift on Friday.”

In other construction news, paving recently completed on Ella Avenue.

“We just have a few wrap-up items with curbing,” Stapleton said.