A slate of new and re-elected Bonner County officials were sworn into office Jan. 9, marking the return of some old faces and the addition of two new members on the board of county commissioners.

Asia Williams is sworn in as a Bonner County Commissioner. Photo by Lyndsie Kiebert-Carey.

Commissioner Dan McDonald performed his last act as chairman of the board by leading the Bonner County Administration Building’s packed first-floor conference room in the Pledge of Allegiance, then shared some parting words with the ceremony’s audience.

“It’s been a great six years,” he said. “When Jeff [Connolly] and I first came in we had a goal to make the county no longer act like government, and actually act like the private sector. We saw an unsustainable financial picture [and] processes that were too much like typical government.

“We set out on a new path and set some new goals and, while it would be great for Jeff and I to be able to take credit, I have to give the credit to all the employees and department heads who said, ‘You know what? We’re going to join in here. We’re going to pull together. We’re going to make it work out,’” he added.

McDonald called the occasion “bittersweet,” and congratulated Commissioner Jeff Connolly on his new appointment as mayor of Priest River. While Connolly ran in 2022 to keep his commissioner seat and ultimately lost, McDonald did not run again. 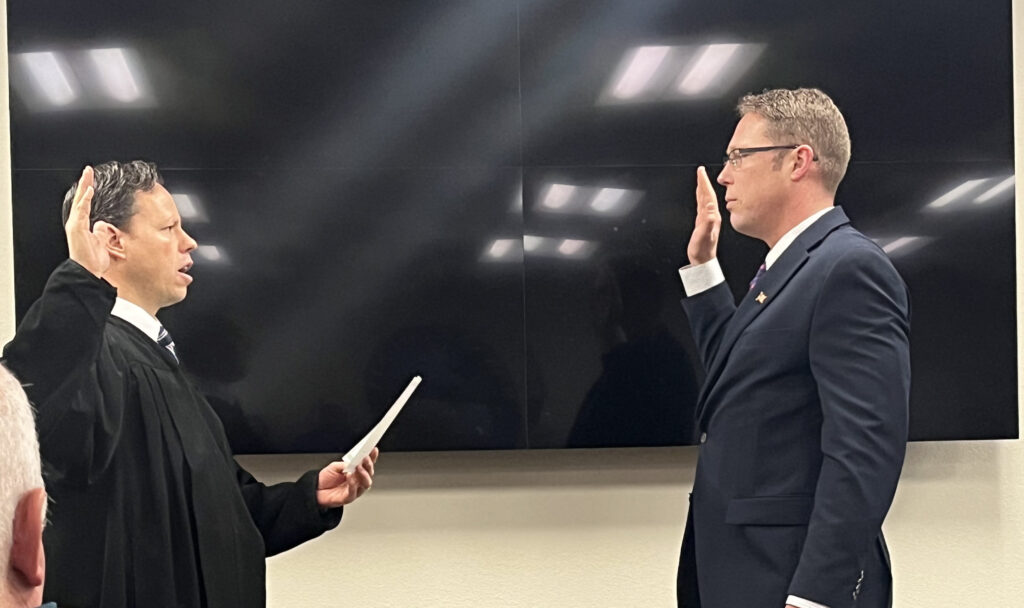 Luke Omodt is sworn in as a Bonner County Commissioner. Photo by Lyndsie Kiebert-Carey.

“I’m going to miss the employees of the county,” McDonald concluded, visibly emotional. “They became more like family than anything else.”

First District Court Judge Lamont Berecz swore in the majority of the officials taking office Jan. 9, starting with Magistrate Judge Lori Meulenberg. Next, newly elected Bonner County commissioners Asia Williams and Luke Omodt took their oaths. Omodt had mostly recently served on the Sandpoint Planning and Zoning Commission, a position he no longer holds in order to discharge his duties on the board of commissioners.

Once the two new commissioners were sworn in, the board undertook its first official business in electing a new chairman. Omodt nominated Commissioner Steve Bradshaw — now the longest-serving member of the board — and Williams seconded the motion. With a unanimous vote, Bradshaw took the helm as chair.

“I think it’s important that we strive to do what’s right,” he said, noting the subtle difference, in his opinion, between the definitions of “legal” and “lawful.”

“If you look at the definition, the definition is the same except for one little, small detail,” Bradshaw continued. “In ‘lawful,’ it includes what is morally right, and just — that we should address all these things that we do within our authority to be not only legal, but lawful.”

He said he looked forward to serving the county with both the new and old elected officials.