Nearly 100 people attended a rally at the Idaho Capitol steps the morning of June 12 to show their solidarity with the victims of yet another mass shooting—this time, at a Orlando, Fla., gay nightclub. The incident left at least 50 dead and another 53 wounded, and is being called the most deadly mass shooting in United States history.

“I feel like something like what happened in Orlando could happen here as well,” said Joseph Kibbe, one of the Boise rally’s attendees and an organizer of this year’s Pride events in Boise. 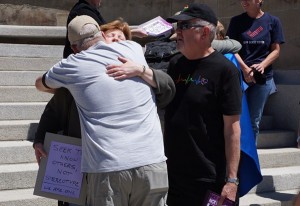 Approximately 70 Boiseans attended a rally at the Idaho State Capitol in solidarity with the victims of the attack in Orlando, Fla. Photo by Harrison Berry.

The shooting started in the early morning hours of June 12 at Pulse, a gay nightclub. It escalated into a hostage situation and police reportedly drove a vehicle into the nightclub in an attempt to rescue people  trapped inside. When they entered, they found the suspect, Omar Mateen, 29, of Port Luce, Fla., dead inside.

Kibbe said in the wake of the shooting, one person posted a threat on the Boise Pridefest Facebook page, including detailed descriptions of violence and weapons. Kibbe and other Pridefest leaders removed the post from the page and contacted the Boise Police Department. As yet, Pridefest has not announced additional security measures for this year’s event, but officials with Add the Words Idaho cautioned attendees at vigils for those slain in Orlando to “exercise caution and have a safety plan in mind at these events.”

“This tragedy underscores the importance of adding the words ‘sexual orientation and gender identity’ to Idaho’s Human Rights Act,” stated Gaona Lincoln, chairwoman of Add the Words Idaho in a news release. “It’s terrifying that in Idaho, only those living in 12 cities would be protected from discrimination, and some would have to hesitate before contacting authorities for fear of being outed.”

This most recent act of anti-gay terror has left Kibbe and others shaken.

“It’s serious. This could be a potential threat,” he said.

Speaking before the crowd, Liberation Spirit Metropolitan Community Church Pastor Renee McCall issued a call to action, imploring attendees to meet the violence with love and not let it affect this year’s Pride events.

“We need to not let this stop us from celebrating our pride. Let us not have this repeated in Boise, Idaho, during our festival,” she said.

Boise Democratic Sen. Cherie Buckner-Webb fought through tears to talk about the responsibility members of the LGBT community have in addressing the shooting.

“I ask you to try to counter this attack with love and peace,” she said. “We are tied in a web of mutuality, and we must remain strong.”

The mass shooting in Orlando is the most recent in a series of incidents of violence directed at members of the LGBT community, including in Idaho. In late April, four men lured Steven Nelson, a Boise State University employee and openly gay advocate for equality, to a remote location near Lake Lowell in Canyon County with the promise of sex for money, where they stripped, robbed and beat him, kicking him in the head more than 30 times. The suspects have been charged with first-degree murder, but the office of the U.S. district attorney has not yet ruled out charging them with federal hate crimes, as well.

“We don’t have a mechanism in place to prosecute these individuals. What message does that send to the community?” he said. “This is real and very fresh for this community.”

Other events honoring the victims of Sunday morning’s shooting organized by the Add the Words Idaho campaign were held at the Idaho Capitol, Twin Falls, Idaho, Moscow and Sandpoint.