The U.S. Forest Service and Customs and Border Protection announced Jan. 31 that the agencies will move forward with the Bog Creek Road project, located in the Bonners Ferry and Priest Lake Ranger districts, about two miles south of the Canadian border. 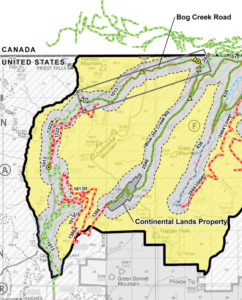 A map of the Bog Creek Road Project. Courtesy USFS.

The project will include road repair, maintenance and motorized closure in the Continental Mountain area of the Idaho Panhandle National Forests.

According to a press release from the USFS, the project is meant to provide Border Patrol agents east-west access to the U.S.-Canada border across the Selkirk Mountains, and will also enable the Forest Service to comply with the Land Management Plan for the IPNF for motorized access management within the Selkirk and Cabinet-Yaak Grizzly Bear Recovery Zone.

Grizzly habitat has been a main point of concern in planning for the Bog Creek Road project, which was introduced in 2018.

“The project will also modify a number of administratively used roads, by putting them into long-term storage, to allow the Forest Service to meet standards for grizzly bear recovery,” USFS stated in the release. “Bog Creek Road will not be open for public motorized use, but available for administrative use only to allow CBP to meet their statutory mission.”

Idaho Conservation League North Idaho Director Brad Smith characterized the decision as “very disappointing,” and disputed whether the roads the USFS will close for “long-term storage” to benefit grizzly bears will actually make any difference.

“Opening the Bog Creek Road will result in the loss of grizzly bear habitat in the Bluegrass Bear Management Unit, which is the most important bear management unit in the Selkirk Recovery Zone,” Smith wrote in an email to the Reader. “The Forest Service and the Border Patrol chose to ‘close’ some other roads in an effort to mitigate the impact this project will have on grizzly bears. However, nearly all of the roads that were chosen for ‘closure’ are already undrivable or provide no habitat value to grizzly bears.”

On whether ICL will pursue legal action regarding the Bog Creek decision, Smith said: “ICL made a good faith effort to resolve our concerns during the administrative process, but the Forest Service and the Border Patrol made it clear that they were not willing to budge. That leaves us with no other option than to put the issue in front of a judge.”