A proposal from the Bonner County Road and Bridge Department Dec. 11 opened up a larger conversation regarding when and why the county makes changes to their winter road maintenance routes. 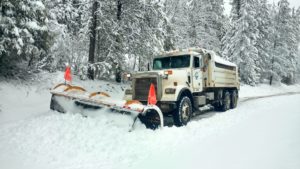 Director of Road and Bridge Steve Klatt brought the issue before the board in an effort to mitigate possible complications on a plow route in the Priest Lake area on Eastshore Road. Klatt said that the turnaround the plow driver is supposed to use is often clogged with trucks and trailers belonging to those snowmobiling the popular area. To avoid having to back down the road, Klatt proposed the plow driver be able to surpass the regularly plowed route to turn around further up the road, which is normally privately maintained.

“The worst scenario I can envision is a plow backing down and running into a snowmobiler with his toy hauler, and then we’ve really got a mess,” Klatt said. “We do not want to make this a regular feature. We just want the operator to be able to make that call.”

Commissioner Dan McDonald asked what would stop the county from extending maintenance onto other privately maintained roads.

“It feels to me that we’re being inconsistent with policy here,” McDonald said.

Klatt pointed out again and again that the passing of the proposal would only mean that the commissioners were giving the plow operator the authority to decide whether he needed to go beyond his regular route to turn around.

Still, members of the public who live further up the road — who would benefit from the road being plowed by the county — commented in favor of the proposal.

“It’s not a private road that we’re talking about. We’re not asking the county to come in and plow our driveways,” said Stephanie Coy, president of the Sandpiper Shores homeowners association. She noted accessibility during emergency situations as a main concern. McDonald said the road leading up to Sandpiper Shores is usually privately maintained. Coy said that Huckleberry Bay took care of maintenance until last year, when they transferred the road to public right-of-way. However, Klatt said that transferral does not obligate the county to adopt that stretch of road to their system.

“We’re not suggesting that we plow this for people — we want to do this for the safety of our road department,” Klatt said. “That’s the only reason we’re doing this.”

Commissioner Jeff Connolly voted in favor of the proposal, while McDonald and Commissioner Glen Bailey voted against it.

“We want to do away with the good ol’ boy network, where we do favors for people we know,” McDonald said. “I look forward to the solution, but I just don’t think this is the solution.”

Klatt said the Eastshore Road issue hasn’t been discussed any further following the Dec. 11 BOCC decision — a decision that Klatt said “stands on its own.”

“There’s a hundred similar situations in Bonner County. However we apply an expansion of our maintenance to one, that same consideration has to be made to all,” Klatt said, pointing out again that last week’s proposal was not necessarily about an expansion of maintenance, though public discussion did make it seem that way. “We’re going to have an issue up there … (if) the plow is forced to back out — that’s the predicament I see.”