Company officials announced this week that design and engineering for the project is under way. According to company spokesperson Courtney Wallace, the new bridge won’t move beyond the proposal phase until all the necessary permits and reviews have been successfully obtained. While no construction is planned for 2017, Wallace said BNSF hopes to keep the government and public in the loop as planning moves forward. 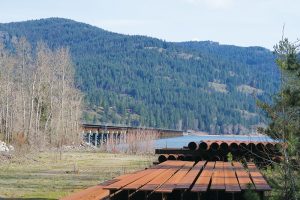 A pile of rusty equipment sits at Dog Beach with the train bridge in the background. Photo by Ben Olson.

“BNSF initiated the project in 2014, and despite a brief pause in development, always had the intention of moving forward with the project,” Wallace said. “Bringing it forward now allows us to adequately handle current and future rail traffic.”

Following completion of the project, the second bridge will allow for two-way train traffic across Lake Pend Oreille. According to Wallace, this will reduce the need for engineers to slow down or stop as they wait for clearance to cross, possibly translating into shorter wait times for drivers stopped at train crossings.

“This is the equivalent to adding a lane on a highway; it allows for a more fluid flow of current traffic,” Wallace said.

While the project is not slated for this year, preliminary work for design and engineering will begin as early as late spring. The company expects to conduct load testing, which will collect information about the performance of driven piles for the new bridge over Lake Pend Oreille, beginning the second week of May and finish by the end of June. However, those dates are contingent upon good weather and may be delayed.

The prep work will have some impact on Dog Beach. Company workers will drive two test pilings into BNSF property near Dog Beach, a job that will require a crane, a pile-driving hammer, a large compressor and necessary support equipment. The work itself will likely produce a great deal of noise. Finally, the BNSF property near Dog Beach will be sectioned off with security fencing, which may limit access to the beach itself.

According to Wallace, the second bridge will not have any direct impact on the amount of train traffic passing through Sandpoint, which is instead driven by the market. However, the bridge is a response to anticipated increases in market activity.

“It is important to remember that as the population continues to grow, demands for goods will grow as well,” Wallace said. “Market demand drives rail traffic. Rail traffic will continue grow whether or not the second bridge is built. Adding it now will help better manage our current volumes and help with any future growth. But also, adding the bridge does not automatically mean there will be a spike in traffic.”

As for railroad safety—a guiding concern for environmental quality activities given the potential impact of a coal or oil train derailment—Wallace believes the second bridge should only help matters. That’s because it provides additional options for train dispatchers to direct traffic. She also emphasized the importance of maintenance in preventing rail accidents.

“Regular maintenance of the railroad allows BNSF to keep its network infrastructure in optimal condition and reduces the need for unscheduled service work that can slow down the BNSF rail network and reduce capacity,” Wallace said.