People post ads to Craigslist for any number of reasons: to find roommates, sell a dishwasher, buy a car.

Matt Demarais posted an ad to find someone with whom to create folk music. He was just learning the banjo, and thought some collaboration would do him well. 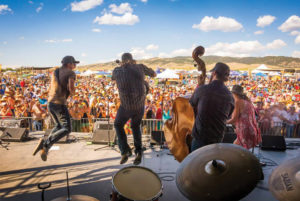 “I was looking for a songwriting partner — someone to help me learn,” Demarais said.

Through the ad he met Lena “Laney Lou” Schiffer, and thus, Montana’s favorite stomp-grass act — Laney Lou and the Bird Dogs — was born.

In Demarais’ words: “We became friends and the rest is history.”

Demarais and Schiffer were joined by Demarais’ little brother, Ethan, on bass, as well as Brian Kassay on fiddle, mandolin and harmonica, and beloved-Bozeman-bartender-turned-bandmate Josh Moore on guitar. The five-piece is a hometown favorite, where Laney Lou and the Bird Dogs have been named the city’s Best Bluegrass Band by Bozeman Magazine four years running. According to Demarais, that’s thanks to the band’s uniquely hyped style and true adoption of a classic stomp-grass folk sound.

Laney Lou and the Bird Dogs have been touring most of 2019 in support of their first full-length studio release Sweet Little Lies. Lively instrumentation pairs perfectly with animated harmonies, and Demarais said everyone’s songwriting contributions work to bring out the best in each aspect of the band’s sound.

“We’re all fairly talented songwriters who contribute to what we’re doing,” he said, “and I think that creates something special.”

Laney Lou and the Bird Dogs are providing the tunes for the 219 Lounge’s annual Dark as Night Winter Solstice party, featuring the darkest beers to welcome North Idaho’s darkest season. The bar will be selling a 5-ounce taster glass with two fill tokens and a tasting notes sheet for $15, and each additional 5-ounce pour will be $5.

The night also marks the band’s last show of the current tour, so Demarais said Laney Lou and the Bird Dogs are planning to give the show all they’ve got.

“We’re looking to end things with a bang, so to speak,” he said.