Barbara Jean is a traveling minstrel in the purest and highest sense of the word. The musician often eluded to as the “Emmy Lou Harris of Minnesota” is on her way to town for a one-night performance at Di Luna’s Friday night at 7:30 p.m. The show follows an opening for well-known country blues musician Charlie Parr in Bozeman and a quick stop in Moscow earlier this week. 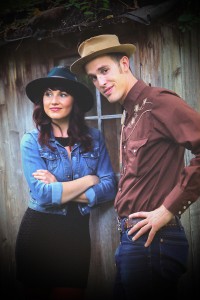 In the middle of a long tour, with stops in her home state, Montana, Idaho and Sandpoint, then on to Seattle, Barbara Jean thinks that being on the road is a wonderful thing.

“When you go out on the road, it really simplifies things in a profound way,” she said.

Accompanying her on this trip is fellow minstrel Jack Klatt. She met Jack while playing the Minnesota Blue Grass Old Time Festival in summer 2014. Both played there and saw each other perform and discovered they had mutual interest and likes musically and later had a chance to perform together at an event in the Upper Peninsula of Michigan. They enjoyed the experience so much that the current tour was born.

When flashing red “maintenance” lights appeared and life on the road from Moscow necessitated a brief stop on tour, Barbara Jean knew how to take advantage of the time. A quick phone call with the Reader while waiting on the results of a auto check- up seems to have her energized just a bit.

An invitation from a friend, Waldorf Academy music teacher Nate Baker, put Sandpoint on the map for her and Jack, and after some research, Di Luna’s seemed like the perfect place to hold the show.

“We felt that what we saw of Di Luna’s seemed to be a good fit with the the genre of music Jack and I make,” she said

She’s never been to Sandpoint before this trip, and my immediate thought, after watching and listening to one of her recent music videos, is how much I think she’s going to feel right at home here.

As seen and heard on her website, BarbaraJeanmusic.com, her music is very much in line with the nature, beauty, spirit and feel of Sandpoint. I think she’ll feel a lot of that when she crosses the Long Bridge. I also think those of us lucky enough to be at the show will see a lot of themselves and our own experiences in her music.

“I usually just call it Americana, folk roots…it has all kinds of different influences, some elements of which I still haven’t figured out,” she said. “I wore out tapes listening to Sam Cooke when I was younger, and I’ve always been drawn to different things over the years and it all seems to mesh well together.”

She plays banjo, fiddle and viola and creates her songs from experiences and accompanying melodies that “just happen in my head…and then, I just craft it.”

The music video of her song “The River” showcases many scenes familiar to our town: sprawling water, nature and railroads. It’s a meandering journey that rolls along through break ups, moving on and only seeing a lost love when looking back. “And the road goes on without you.”

The rhythm and lyrics of “Wishing Well” conveys the lonely melody of lost love, a driving beat underlying the message that this special someone will always remain in her heart. The soulful “Flesh and Bones” draws you in with a strong slide guitar leading the way. Barbara Jean brings the song together with strong, velvety tones and lyrics. Her song, “Keep Rockin’ It” does just that with a folksy complement.

Her favorite part of this entire road experience, she says, has been the road trip in itself. “Traveling the country has just been spectacular. This part of the country reminds me so much of home: the vast wilderness, the wonderful countryside and the people we’ve met. And to share the music that Jack and I love is a pretty amazing thing.”

Once the curtain falls and lights drop on the Friday night performance, Barbara Jean and Jack are going to have an opportunity to spend a little time with friends here in town before heading to Seattle and then back home to Minnesota. Welcoming them to Sandpoint should be a highlight for anyone’s Friday night. Let’s fill the place up for them and welcome them “home.”