At the top of the hill

When the owners of the property known locally as “The Pine Street Sledding Hill” announced it would no longer be open to the public, many longtime locals acknowledged it was the end of an era in Sandpoint. 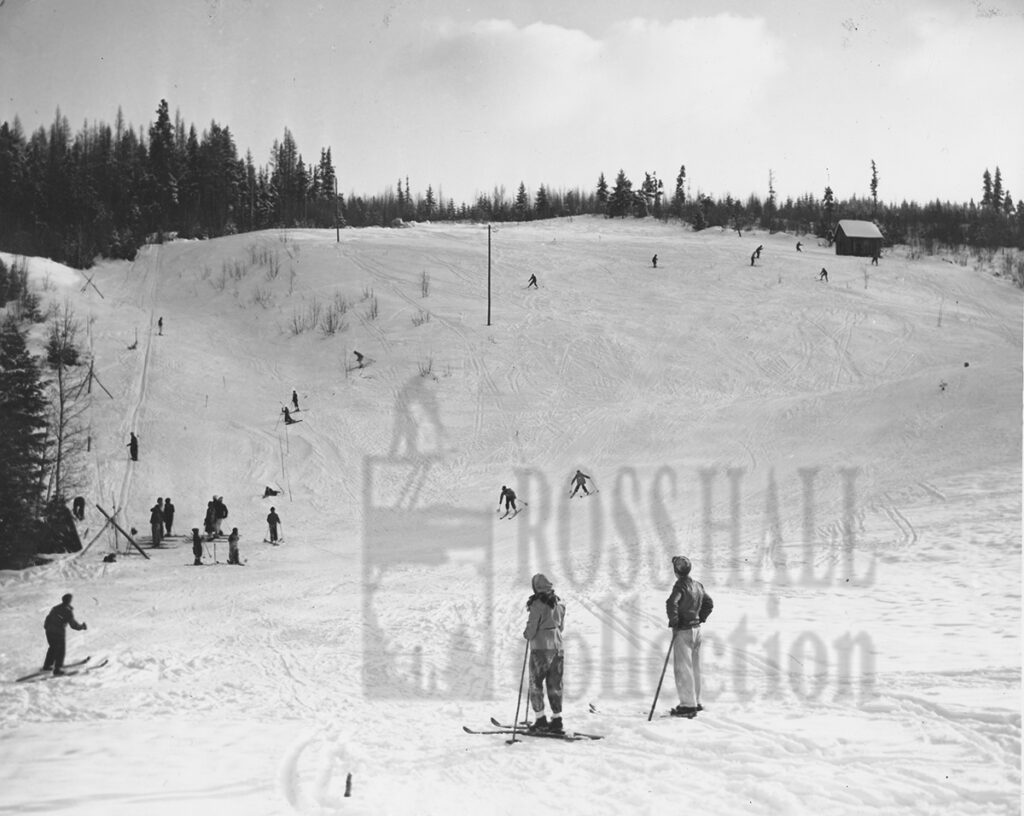 A photo of the Pine St. hill from below in 1943, as skiers barrel down the slope. On the photo, a handwritten note reads: “The Pine Street Hill, granddaddy of successful skiing slopes at Sandpoint, Idaho in the forties and early fifties. Rates were 10¢ for use of the hill, any age and an additional 25¢ juniors and 50¢ seniors for use of the cable lift.” Photo used by permission from the Ross Hall Collection.

Sandpoint has been known as a “ski town” for generations, with Schweitzer Mountain Resort providing some of the best alpine adventures for skiers and snowboarders. What many don’t realize is the birth of this winter sport didn’t begin on the mountain, but closer to town on this small hill located on Pine Street.01 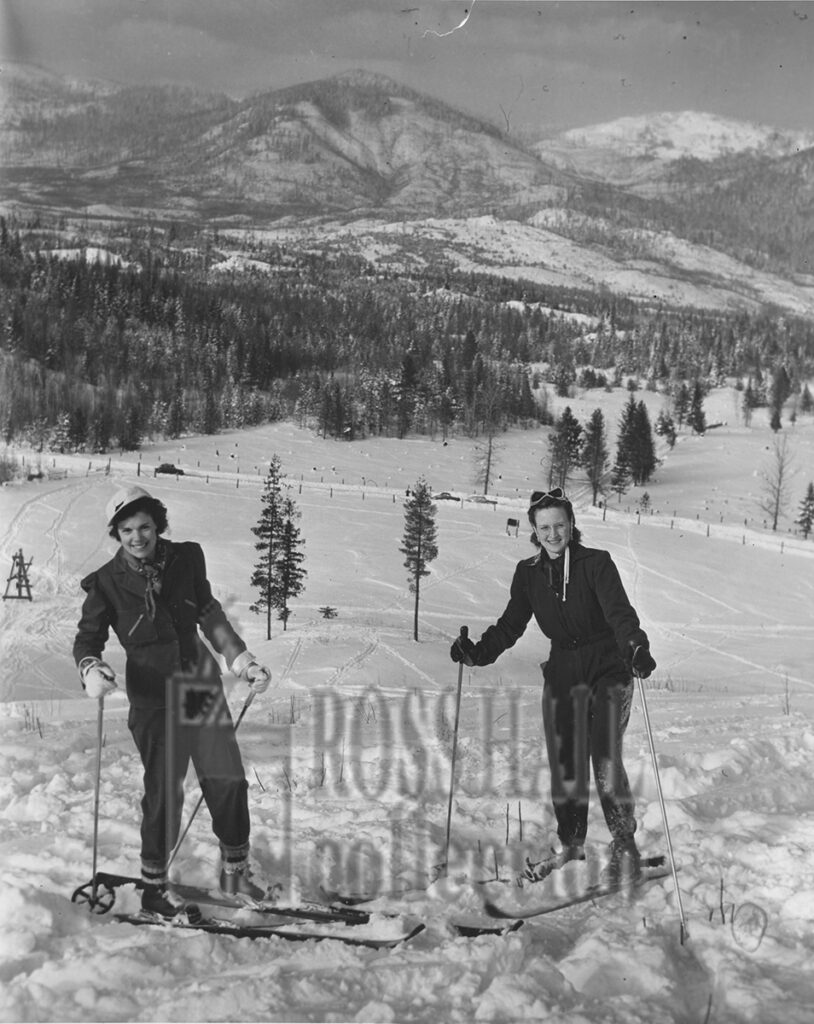 Two local Sandpointian skiers of the past stand atop the Pine St. hill, circa 1943. Photo used by permission from
the Ross Hall Collection.

The open glade of terrain has a storied history in Sandpoint. Ross Hall, the famed photographer who documented so much of Sandpoint’s early history, snapped several photos from the hill years before Schweitzer existed. The photos show smiling locals with enormous wooden skis strapped to their feet, bracing up for courage before barreling down the hill.

The hill has held a place in Sandpoint’s past as far back as the 1920s, when the Northern Idaho News ran a story about local D.J. McInaney and three friends who wanted to prove the pulling power of their new 1929 Ford Tudor sedan by climbing up the hill.

In 1949, the Sandpoint News Bulletin advertised that “ski enthusiasts” were meeting to plan for further development of the “Pine Street ski run,” which it described as “the focal point for local skiers during the holiday period.”

At one point there was even a tow rope installed at the hill, ferrying skiers up to the top thanks to the local Roundtop Ski Club, installed and operated by Thad Lowary. Discussions were also in the works to install lights on the run to provide nighttime skiing, but those plans never came to fruition.

“The hill offers a good variety of skiing,” the article continued. “It has been made more accessible by the cooperation of Ralph Samson, University of Idaho experiment farm superintendent, who took a tractor with a bulldozer blade and made a good parking place for a fair sized number of cars.”

Gary Weisz, whose parents Joe and Lois purchased the 20-acre parcel in 1964 from friend and neighbor Anna Roe, said the decision to close off the sledding hill did not come lightly.

“It brought tears to my eyes to close the Pine Street Sledding Hill down,” Weisz wrote to the Reader. “So much heartfelt regret in doing so, but I guess it is just the end of an era and another part of Bonner County history that silently slips through our fingers.”

Weisz said he and his family have always been “very community minded and shared the property without hesitation for many years.”

The decision to close comes out of “liability issues to consider in this ever-changing world,” Weisz said, but pointed to the fact that his parents offered and sold the top 160 acres, which includes the large meadow and surrounding timber land to Kaniksu Land Trust to help establish the Pine Street Woods.

“That is something we are proud of, something for future generations to enjoy to the fullest,” he said.

The family had mulled closing the hill for the past year after Weisz’s parents became disabled and their health began to decline.

“The liability issue was definitely the main determining factor, although we had no instances that I am aware of that resulted in serious injuries,” he said. “I have nothing but praise for all those who chose to frequent our property. I cannot think of a single instance where trash was a problem — the adults who were present took it upon themselves to safeguard the youngsters and remove any little that might have been left behind by the younger folks. I could have never asked for a more responsible and thoughtful group of individuals.”

Over the years, the Weisz family always made it available for locals to use free in winter months, never collecting any user fees.

“We have never had any issues with the wonderful people who would bring their children and grandchildren for a day’s sledding,” he said. “Everyone was so friendly and courteous. … We never advertised the sledding hill, but did encourage folks to invite their friends and even allowed family pets to accompany them.”

Weisz said he remembers skiers using the hill in the past, and also remembers the tow rope installed at the hill.

“Steel automobile wheels used to suspend and guide the rope for the rope tow [that was] hung from trees and poles to the top of the ski hill,” Weisz said. “A number of those wheels still remain on the ground in different locations on the west side of the cleared hillside at the location of the old rope tow.”

Weisz said he recalls folks using the hill as far back as he can remember — for more than 50 years — and noticed it became quite popular after he moved his mobile home to the base of the hill about 20 years ago.

“Throughout the last 20-odd years I have kept a path cleared to the base of the hill for easy access and allowed free parking in my driveway for sledding enthusiasts,” he said. “This led me to plowing a large parking area to accommodate the increasing number of vehicles that would arrive.”

After moving to the base of the hill, Weisz said he established a policy whereby anyone could sled during daylight hours without asking permission: “It was always about making your family and friends feel welcome and at home during your visit.”

Weisz said his years are filled with fond memories of the ski hill. He said more than 200 people were there on New Year’s Day 2019, sledding until dark. He also remembers a time when some young folks arrived after dark and set up some lights.

“They set up floodlights on the hill and built a snow ramp,” he recalled. “One fellow on a snowboard would come shooting down the hill, hit the ramp and turn somersaults in midair while another fellow filmed the whole thing with what appeared to be a small movie camera mounted on a tripod. I was very impressed with such outstanding ability. Young people are so awesome and the future is in good hands as far as I am concerned!”

Weisz said he hopes the community understands the decision to close the hill and said he is honored to have had the property be so celebrated in Sandpoint’s history.

“I have such fond memories of past winter seasons that brought such joy to my life and not seeing all the children and smiling adults is like losing part of my extended family,” Weisz said. “I hope everyone understands and holds no hard feelings towards us and all I can say is that I love them all and appreciate having had the opportunity to share a little joy and a little kindness with our Bonner County neighbors. God bless them all.”