An interview with: Sublime with Rome

If you were alive in the ‘90s, or if you are currently living and breathing, you’ve probably heard of a little band called Sublime. The punk-ska-reggae-rock band blazed their way into the American soundscape with three studio albums, but in 1996, when frontman Bradly Nowell died of a heroin overdose, they disbanded. 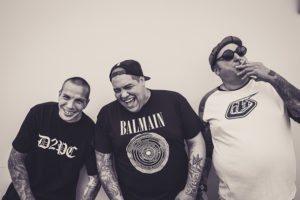 Carolos Verduga, left, Rome Ramirez, center and Eric Wilson, right. Together they are Sublime with Rome. Photo by Andreas Ramirez.

In 2009, the surviving members of Sublime – Floyd “Bud” Gaugh and Eric Wilson – reformed the band into its next life cycle, Sublime with Rome, featuring Rome Ramirez, a young guitarist and self-proclaimed Sublime fan. The trio carried on the Sublime tradition, releasing two studio albums and touring worldwide. After Bud stepped away in 2011, former Tribal Seeds drummer Carlos Verdudo rounded out the trio to its current lineup.

Ramiriz set aside some time to chat with the Reader to talk about their upcoming appearance at the Festival at Sandpoint on August 10, 2018.

BEN OLSON: Hey Rome, how about we start by telling us a little about yourself and where you’re from?

ROME RAMIREZ: I’m from northern California, born and raised, and very much, growing up, my favorite band in the world was Sublime. I got to meet Eric when I was 18, started kicking it and jamming and shit, then after doing that for a while, one thing led to another, he said, ‘Would you be interested in playing in Sublime with me?’ I thought he was joking at first, but he said, ‘No, I’m serious,’ and the rest is history. We just started hitting the road slowly, started promoting. It all came together. That’s kind of where we’re at now. We’re about to drop this new album that we got, really just keep playing as much as possible, overseas, trying to expand our market, bringing new fans to music.

BO: What was it like, growing up to have this inspirational band you follow, then all of a sudden you’re stepping into a very key role. Was this a little surreal to you?

RR: Yeah, it was. I kind of knew where the next couple years of my life were going to go from that point on. I was like yeah, I’m finally going to be able to get inside a tour bus and go show to show, like I’ve always dreamed of. You know, I just knew my life was going to change completely, and that’s a really insane feeling. It usually happens for people slowly along the way, and you don’t really know that, but in my case, it was just like, one meeting and they said, ‘We have all the shows lined up for you guys,” and I remember thinking, ‘Whoa, this is going to be my life.’ It’s so cool.

BO: That is cool. I’m really happy for you, Rome. Tell me about the new album.

RR: We’re probably going to drop it early next year. We have a new single coming out July 27, and we’re f***ing excited about that, man. It’s been a while since we put out any new music. We’ve just been sitting back, playing live a bunch, letting the radio do its thing. And we’ve been taking a bunch of inspiration in. We’ve been working on this album about a year and a half, so we finally got a pack of songs we’re really stoked on. We went to Texas at this studio we play out there. It was beautiful, it’s in the middle of nowhere and there’s a hundred thousand palm trees – crazy. But they had all this crazy vintage gear from all these legends and stuff. We went out there and recorded all the songs we’d previously written. It was rad. We did the whole thing with Rob Cavallo, who’s this master producer, and it was a great time working with somebody of his stature, so it was really cool, a different direction for us.

BO: How does the songwriting work? Do you write together, or is there one person who takes the lead on that?

RR: I pretty much write the majority of the lyrics and chord structure, then when I bring them over to (bassist) Eric (Miller), he has a way of dissecting it all and chiseling out the best parts and turning the arrangement into something with more order to it. His approach has always really captured that sound.

BO: When you have a band like Sublime with such an established sound, it must be comforting in one sense, but also nerve-wracking because it must be hard to honor that core sound, that punk-ska-reggae that Sublime helped put on the map.

RR: Well, I feel like it’s easy for us to find that sound. There are a lot of people who took onto the elements of Sublime that I feel were the most obvious, whereas, we always try to stay true more to the roots. Instead of asking ‘What would Sublime do?’ it’s more asking ‘What would Bad Brains (an early influential punk reggae band) do?’ cuz that’s our barometer for how far to take it. Sometimes you’ll throw a foot in one water a little too far, or whatever. We’ve got really hard songs and really soft songs, but I think this is such a good balance of both of that, it doesn’t sound like a concoction of a bunch of songs trying to hit the f***ing radio. But at the same time it doesn’t sound like some regurgitated f***ing reggae rock band. We really have this type of balance between production and songwriting, coming from within the band. Now we live in a time that provides such great lyrical content, so it’s a very perfect time for us to be able to write an album, which is a pinnacle in our lives.

BO: You mentioned playing with Eric Miller before. Being an original member of Sublime, does he bring a lot of expertise and experience from the early days?

RR: Of course he does, but he’s not the kind of person who would ever sit you down and say, ‘I want to speak knowledge to you.’ He’s just like your traditional epic person, epic character. You watch how they live their lives and watch the decisions they make and say, ‘OK, I can see why you’re at where you’re at today.’ Just being around somebody who’s so great and legendary and watching them go through their day and watching them say yes to certain things, I’ve learned some big life lessons from Eric.

BO: What’s it like for you to step into such big shoes? A lot of people say Bradley Nowell was an integral part of Sublime, and after he died, the band wasn’t the same. How do you deal with honoring his sound and stepping into that role?

RR: Honestly man, for me, it’s kind of like marching to the beat of my own drum, but I’ve kind of dealt with that even before I was with Sublime. I quit college, I wanted to do this, play music, and its kind of like that has always been there, starting a band and rolling with Eric and Bud, and as long as they’re cool, I’m cool.

BO: What should we expect from your upcoming Festival show? Old stuff? New stuff? Any hints?

RR: We always play a mix, you know. The rule of thirds. We try to keep it a third hits, a third legacy and a third of Sublime with Rome. There’s so much that’s happened with Sublime, we like to kind of space it out.

BO: Well, having grown up listening to Sublime, I’m super excited to see you guys next month. Thanks for taking the time to chat with us.

Sublime with Rome will play the Festival at Sandpoint on Friday, August 10, 2018. They will drop the single “Wicked Heart” on July 27 in support of their forthcoming album on Five Music Inc. distributed by Song Red/The Orchard. For tickets to the Festival, go to festivalatsandpoint.com.