Tucked in an unassuming brick building on Boyer, Lake Pend Oreille High School is the Lake Pend Oreille School District’s premier alternative school. What “alternative” means, however, takes a different form depending on who you ask. This series will explore the stereotypes these schools face, the kinds of students who find themselves there and what actually happens within the walls of an alternative high school. 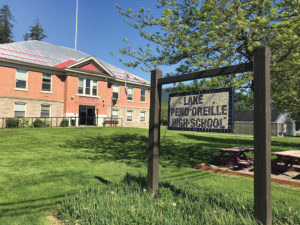 The state of Idaho defines an alternative school as a place where students meet a set criteria of difficult circumstances. Alternative schools in Idaho receive rural funding — including LPOHS, though they’re technically in an urban location — and retain small class sizes for individualized support.

Must meet three of the following criteria:
• Has repeated at least one grade
• Has absenteeism greater than 10 percent in proceeding semester
• Has overall GPA less than 1.5 prior to enrollment
• Has failed one or more basic skill subjects
• Is below proficient, based on local criteria and/or state standardized tests
• Is two or more semester credits per year behind the rate required to graduate
• Has attended three or more schools within the previous two years, excluding dual enrollment

OR, the student must meet one of the following criteria:
• Has a documented or pattern of substance abuse
• Is pregnant or a parent
• Is emancipated
• Is a previous dropout
• Has a serious personal, emotional or medical issue(s)
• Has a court or agency referral
• Demonstrates a behavior that is detrimental to their academic progress

Students apply and are then interviewed before being accepted to LPOHS.

These are the technical parameters, but LPOHS Principal Geoff Penrose said there’s a long answer.

“‘Alternative’ can mean a lot of different things to a lot of people,” he said. “But what it basically means is we’re doing whatever it takes to reach the students who walk through our door each morning. This means strong student-teacher relationships and working with them in a trauma-informed way.”

“I’m pretty thick-skinned about it, and I understand why people have that perception, but it’s just plain ignorance,” he said. “I don’t mean that in a negative way, they just don’t know.”

What they don’t know, he said, is the breadth of circumstances that lead a student to LPOHS.

“I tell people all the time: There’s 90 kids here, and 90 reasons they’re here. Everyone has their own journey that brings them to our door,” he said. “We’re a school of choice — no one is being placed here by the court, Sandpoint High or anybody.”

The “bad kid” stamp placed on the alternative school system is something Penrose works hard to diminish.

“I can see people looking at (the student eligibility criteria) and saying, ‘Well these kids are bad kids, they’re showing these characteristics,’” he said. “But another mantra is, ‘We don’t make ‘em, we just take ‘em.’”

Penrose said it isn’t his intention to shame the students’ previous schools. He said it’s simply a result of a system that can’t always accommodate every type of student.

“ (At LPOHS) we have the experience and training to ask the ‘why’ of student behaviors and academic choices, and then approach the problems we discover,” he said. “It’s a matter of addressing the problem (homelessness, e.g.) instead of the symptom (poor attendance, e.g.).”

Another key, Penrose said, is a small student-to-teacher ratio. He said the best way to bridge the gap between a student and their drive to succeed is having an adult invest in truly knowing and supporting them.

“It’s a long, long road building these relationships, but it is the basis of what we do,” he said.

LPOHS Senior Keaton Berg can attest firsthand to how such relationships changed his academic experience.

“I came to this school personally because I didn’t have friends. My grades were straight Fs. I had four credits when I got here, and now I need half a credit to graduate,” he said.

He said the one-on-one time at LPOHS helped him get on the right track, combined with the close-knit atmosphere. He noted that school-wide assemblies are called “family meetings.”

In short, Berg summed up his decision to attend LPOHS: “It saved me.”