As promised, the American Civil Liberties Union of Idaho filed a lawsuit April 15 challenging House Bill 500 — a controversial law signed by Governor Brad Little during the most recent legislative session that bans transgender and intersex women and girls from participating in female sports at the public school or university levels.

ACLU-Idaho joined with its national parent organization as well as Seattle-based feminist advocacy group Legal Voice and law firm Cooley LLP in filing the suit on behalf of a transgender track athlete at Boise State University and another Boise State student, who is not transgender but worried they, too, might be forced to undergo the “sex verification” test imposed by the new law sould they participate in school sports. 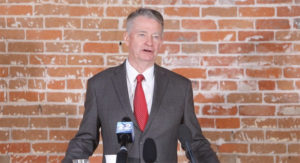 A still photo from a video of Gov. Brad Little addressing Idaho media at an annual breakfast question-and-answer. Courtesy YouTube.

“We’re suing because HB 500 illegally targets women and girls who are transgender and intersex and subjects all female athletes to the possibility of invasive genital and genetic screenings,” stated Gabriel Arkles, senior staff attorney with the American Civil Liberties Union’s LGBT & HIV Project, in a news release announcing the suit. “In Idaho and around the country, transgender people of all ages have been participating in sports consistent with their gender identity for years. Inclusive teams support all athletes and encourage participation — this should be the standard for all school sports.”

Idaho is the only state in the country to both institute a blanket ban on sports participation by transgender athletes and to enact a statewide law regulating transgender and intersex athletes.

“Alongside Idahoans throughout the state, we have been fighting this hateful, unconstitutional legislation since it was introduced,” ACLU of Idaho Legal Director Ritchie Eppink stated in the release. “Businesses, major employers, schools, doctors, and counselors have all warned that this law is terrible for Idaho.”

Amid an already divisive 2020 legislative session, HB 500 garnered perhaps the most headlines nationwide. The Idaho attorney general’s office weighed in on the law in February, stating in a nine-page analysis that it had “concerns about the defensibility of the proposed legislation” — including with regards to the Equal Protection Clause of the 14th Amendment and Title IX regulations.

Now, as the Idaho Statesman pointed out, the AG’s office will be expected to defend the state in the case against the law.

Echoing her soon-to-be legal opponents’ own previous concerns, Kathleen Hartnett of Cooley, LLP stated in the news release, “By discriminating and invading privacy, HB 500 violates the U.S. Constitution and Title IX, and we look forward to presenting our arguments to the court.”

Read the full complaint at aclu.org/cases/hecox-v-little.