A North Idaho pandemic: Then & Now

For everyone alive in North Idaho today, the novel coronavirus outbreak is uncharted territory.

Across the world, leadership is suspending gatherings, closing schools and encouraging “social distancing” — in some places even enforcing it.

At no time in recent memory has such a climate of precaution and fear reached the Idaho Panhandle, but nearly 102 years ago, Bonner County citizens found themselves in a similar situation: taking drastic measures to mitigate the spread of the Spanish Influenza.

Comparing COVID-19 to the 1918 flu pandemic is a false equivalence — in the century since, science and medicine have made leaps and bounds to better understand viruses and how best to contain and vaccinate against them. However, looking at the local responses to such emergencies reveals eerie similarities and, if anything, provides a compelling glimpse into the local past. 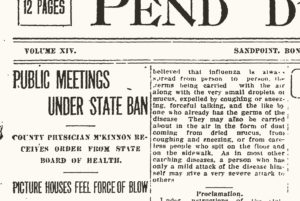 The first record of the Spanish Influenza making an impact on the lives of North Idahoans appeared in the Sept. 27, 1918 edition of the Pend d’Oreille Review. A brief article announced that all movement of World War I military camps had ceased. Bonner County had 14 men slated to head to various training camps, who were now told to stay home. Northern Idaho News ran the announcement on its Oct. 1 front page: “The epidemic of influenza over the country is responsible for the postponement of the October call of drafted men until further orders.”

Things ramped up in the days to follow, not unlike the pace at which things are currently moving with the COVID-19 response. By Oct. 11, 1918, the lead story in the Review ran with “Public meetings under state ban: County physician McKinnon receives order from state board of health.”

The remainder of the headline highlighted the impact on local business — “Picture houses feel force of blow” — and directly beneath, an ornate printed box labeled “Sandpoint’s first case,” complete with a woman’s name and address.

The article details the public meetings ban, which closed churches but not yet schools, and shared the importance of staying home to avoid getting others sick.

“As in most other catching diseases, a person who has only a mild attack of the disease himself may give a very severe attack to others,” the article stated, underscoring “social distancing,” circa 1918.

It appears the sensibilities of basic pandemic lockdown have remained the same over the past 100 years. A frequent column, titled “Uncle Sam’s Advice on Flu: Latest word on the subject,” shared tips from national agencies for fighting the virus in a question-and-answer format.

“It is very important that every person who becomes sick with influenza should go home at once and go to bed,” one October column stated. “This will keep away dangerous complications and will, at the same time, keep the patients from scattering the disease far and wide.”

By Oct. 22, 1918, the front page of Northern Idaho News featured, “First death from Spanish influenza: Lumberjack from camp is first to succumb in this city.”

The headline trickled down the page in partial sentences: “Many cases reported. Several cases are critical. One death at Laclede. Schools closed indefinitely. Difficult to get accurate figures as to number of cases owing to slackness in reporting.”

“The influenza situation in Sandpoint and Bonner County is much more serious at the present writing than it was a week ago, when only a few cases had appeared,” the body of the article continued, “but opinions are divided as to whether it is on the increase or the decrease.”

Where social briefings once lived, news of the local influenza fight began to take over. The “City Brevities” section in the Nov. 1 Review detailed both loss of life and showed a community rallying to protect itself:

“B.H. Hornby, head of the Dover mill, is among the influenza victims of the week”; “Miss Carnes, Miss Pederson, Miss Thatcher and Miss Mason of the city teaching staff have responded to the call for nurses, and are assisting wherever they can be of most service in the homes of influenza patients.”

An initial announcement that schools would be reopened in early November proved premature when 10 new flu cases cropped up in a week.

When the state ban on public gatherings was finally lifted on Nov. 24, 1918, public gathering places had been closed for six weeks, and schools for about five weeks. The Nov. 22 Review reported that “during the epidemic 14 deaths occurred in Bonner County directly traceable to the influenza” and “there were five residents in other parts of the country including soldiers from this county who died at campus.”

The newspapers continued to follow the flu outbreak closely through December and into January. Both Bonner County and the city of Sandpoint teamed up in December to fund a nurse who would make house calls specifically for suspected flu cases. The Red Cross was still seeking local volunteers around Christmas, one organizer quoted in the Review: “The women of Sandpoint must respond to the appeals made to them to nurse the sick or the city and county will see many people die with influenza and its complications.”

However, based on the newspaper coverage of the time, it appeared that the brunt of the pandemic had passed.

A special thanks to the East Bonner County Library District’s digital newspaper archive for making this story possible. Though the physical library branches may be currently closed in response to COVID-19, the newspapers — as well as the entire digital library — are available at ebonnerlibrary.org.