Past and present BGH officials reflect on 70 years of community

If there is an idea central to the character of Bonner General Health, it’s community.

Defined by the hundreds of doctors, nurses and other employees that walk the facility’s decades-old hallways, the BGH community also includes local luminaries who have served on the board of directors or contributed to the hospital’s charitable projects. And, of course, it’s comprised of the North Idaho residents who have used its services and influenced its evolution. 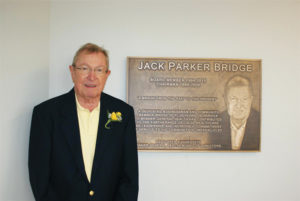 Jack Parker stands at a plaque dedicated to him at the Bonner General Health skybridge. Photo courtesy BGH.

As the hospital prepares to celebrate its 70th anniversary on Friday, July 12, a handful of key officials and employees reflected on the hospital’s past and present. Again and again, the idea of community presented itself as a common thread; and, as they shared hopes for the future, the most earnest was that Bonner General remain a uniquely North Idaho institution.

“Community-based health care is important to me personally because I believe that we can respond more effectively to the needs of our community since we live here,” said Sheryl Rickard, Bonner General Health CEO. “Our patients are our friends and families. I believe that we have more of an interest in not only taking care of the injured and sick but ensuring that there are programs in place to keep our community members healthy.”

From its incorporation on July 12, 1949, Bonner General Health grew with the town that surrounded it. Its origins were humble — a former military infirmary barged across Lake Pend Oreille in pieces from Farragut Naval Training Center.

Perhaps no local figure embodies the hospital’s transformation better than Jack Parker. He joined the hospital board of directors in 1964 and went on to serve for more than 50 years.

“We have always had a seven-member board, and we very rarely had a meeting without perfect attendance,” Parker said.

Over those five decades, he saw BGH grow from a three-doctor staff — Wilber C. Hayden, Neal Wendle and Helen Peterson — to today’s 62 physicians on active medical staff, eight on affiliate staff and five on community associate staff. It’s fitting, then, that the most unique symbol of the hospital’s growth is named in his honor: The sky bridge connecting the main hospital building to its new health services building was named the Jack Parker Bridge to Better Health upon its completion in 2015.

“Bonner General Health has always been known for the quality care provided here,” Parker said. “The employees earned that reputation by the care they give their patients.”

Another link to the past is Annette Braun, for whom hospital work is a family tradition. Her mother, Lila Lafever, worked as a licensed practical nurse in the original refurbished infirmary. Braun herself went to work for the hospital in 1973, and her connection to the institution is personal as well as professional.

“My family received a lot of support with the passing of members over the years,” she said. “My sister was in hospice care and everyone there cared for our entire family. They just took care of everything.”

Braun, and later Rickard, who started her BGH career in the 1980s, were witness to one of the most transformative periods in the hospital’s history. First, there was the transition from a paper-based records system to an electronic one. Just as profound a change — one that Rickard recalls as emblematic of Bonner General’s growth — was the shift from in-patient care in the 1980s to an emphasis on out-patient services in the new millennium.

That was due in part to technological improvements that minimized the need for hospital stays, Braun said. According to Rickard, it also reflected a changing idea in the community about what health care looks like. No matter the reason, out-patient care characterizes the hospital’s modern operations, representing 75% of revenue compared to 25% in the late-1980s and early-’90s.

Likewise, Bonner General was integral in helping develop the county’s emergency management services. It was the first hospital in North Idaho to have board-certified emergency medicine physicians in the emergency room, and the improvements didn’t stop there.

“One thing I am most proud of is that Bonner General Health was an integral part in setting up 911 and organizing EMS services in Bonner County in the late ’90s,” said Sharon Bistodeau, who began working for Bonner General Health in 1992. “Prior to that, residents called the Sheriff’s Department or direct phone numbers to privately-run ambulance companies.”

Rickard said local management is the most important factor in remaining responsive to community needs. That’s why, as hospital officials plan for the future, one of the most important priorities is to keep Bonner General an independent operation.

“When we see a need, we can address it, even if it isn’t a sound financial decision,” Rickard said. “An example of that is behavioral health. We had a need for a psychiatrist in Sandpoint. We developed the business plan, and even though we knew it wasn’t a financially prudent decision, it was the right decision for the community.”

Those kinds of options may go out the window should ownership of BGH shift to a for-profit corporation. But that’s exactly what’s happening to independent hospitals around the country. NPR reports that 29 for-profit companies bought 11 nonprofit hospitals and 18 for-profits in 2017 alone, according to an analysis by Irving Levin Associates.

“There is definitely a trend in the United States for smaller hospitals to seek mergers or acquisitions by larger organizations to stay financially viable,” Rickard said. “We at Bonner General Health have a different strategy. Our board of directors are committed to staying independent and not becoming part of a larger organization.”

For Rickard, Bonner General Health’s 70th anniversary is a cause for celebration. But it also warrants a careful look at the needs of the community. According to the hospital’s Community Health Needs Assessment, child abuse and neglect, suicide, behavioral health and obesity are the most pressing problems affecting the county. These are thorny issues, to be sure. But Bonner General was started as a community institution 70 years ago to tackle exactly that kind of work. If Rickard has her way, that same mission will guide it through the next 70 years.

“As parents, grandparents and caring adults, we want the next generation to be healthy and happy,” she said. “I’m very proud of our commitment and the investment we’ve made in our community’s health.”