There’s just something about the old school way of doing business that appeals to Dr. Nate Harrell and Jen Heller. 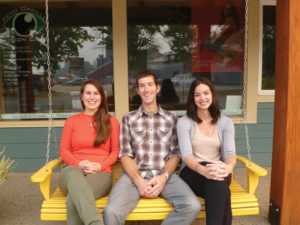 Harrell recently announced that Pend Oreille Vision Care, his optometry practice with locations in Sandpoint and Bonners Ferry, will now be joined by a third in Priest River.

Harrell opened the first Pend Oreille Vision Care in Sandpoint after a lengthy research project on where he wanted to live and work after completing optometry school.

“Nate went on citydata.com and researched 12 areas that were beautiful, outdoorsy areas,” said Heller, who serves as office manager. “There was a practice here in Sandpoint and he bought it from them, built it back up.”

Heller said Harrell lived in the back of his office and ate off a hot plate for three years while getting the practice off the ground. It was during this period that the two began dating.

“We worked together before we started dating,” said Heller. “When I started, he was the doctor, I was the employee.”

Harrell, with Heller’s “office mom” assistance, built the practice together, emphasizing on old school business practices that thrive in a small town environment.

“When you have a super small practice, you get to know every one of your patients by name,” said Heller. “We’re really old fashioned. We cap our patient load at eight to 10 patients a day, where a lot of modern eye clinics will move 30 patients through a day. No time for questions, for follow up. We don’t like that.”

After the Sandpoint office at 514 Oak St. had become established, Harrell and Heller noted they had over 100 patients driving down from Bonners Ferry.

“There was only one eye doctor in Bonners Ferry, and he retired recently,” said Heller. “We went from having a one day clinic to seeing patients every day.”

They opened the Bonners Ferry location at 6348 Main St. in 2014, or as Heller puts it, “the ‘Old Cobblestone House,’ everyone knows where it is.” 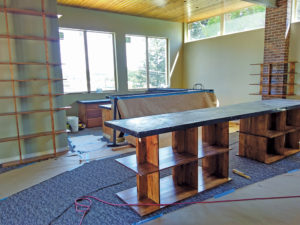 The Priest River location is currently being renovated and is slated to open June 11. Courtesy photo.

Recently, the pair noticed the same problem in Priest River.

“In Priest River, there is no eye doctor,” said Heller. “The nearest one is in Newport, but they don’t take Idaho Medicaid. We’ve had people come down in summer from Priest Lake after having an accident on the lake or getting something stuck in their eye. We thought it was time to put something closer for the people of Priest River. There’s almost 2,000 people living in that area and they’re having to drive a long way to see an eye doctor.”

Heller said the pair has enjoyed renovating the new Priest River location, which used to be a gas station and a thrift store.

“We took up a drop down ceiling and raised it up,” she said. “We both like getting to reimagine the place, and hiring local guys to come in and do the work.”

In fact, along with the customers, it’s the employees that Harrell and Heller have hired that truly inspire them. Besides the three doctors, Pend Oreille Vision Care employs a half dozen others to help with sales and run the day to day activities at each location.

“Our employees are awesome,” said Heller. “We are so fortunate to invest in the local economy. We have three doctors – Nate, who started this whole thing, and then we hired Dr. Danielle Tholl in 2015. She’s the bomb diggity. There’s a reason the Bonners location is doing really well, and it’s her.”

“Her maiden name is Trost, and that family goes back three generations in Priest River,” said Heller. “Amber grew up in Priest River, went away to optometry school, then we hired her when she came back to the area.”

While all three Pend Oreille Vision Care locations specialize in the usual eye-related matters such as prescriptions and sales, Heller said the peripheral services often put them a cut above the rest.

“One of our favorite things to do is eye emergencies,” she said. “People might have something stuck in their eye and it’s cheaper and usually better to go to an optometrist than a hospital. We really like being there for them.”

Heller said Pend Oreille Vision Care accepts most major medical insurance, and that they’ll “probably run a reduced price for the first couple months of being open in Priest River.”

To schedule an appointment at either of their Sandpoint, Bonners Ferry or Priest River locations, call (208) 265-7965.