Controversial days of Thanksgiving and prayer in early America

When you pray, go into your room and shut the door.

When the church and state tucked into bed together, it was the church that ended up asking: “Will you respect me in the morning,” and the answer was almost always “No.”

—Forrest Church, So Help Me God

Religion and government will both exist in
greater purity, the less they are mixed together.

The fondness of magistrates to foster Christianity has done
it more harm than all the persecutions ever did.

As we celebrate Thanksgiving this year, it is significant to note that ten presidents have declined to issue national proclamations. Thomas Jefferson and Andrew Jackson explicitly cited the separation of church and state as their reason, and we can assume that the other eight agreed with them. 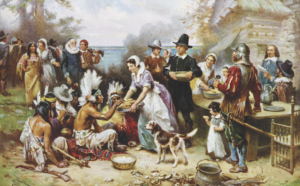 At the Constitutional Convention in 1787 a proposal to opening its sessions with prayer did not even come to a vote. The record shows that “the Convention, except three or four persons, thought prayers unnecessary” (The Records of the Federal Convention, vol. 1, p. 452). Except for the “establishment clause” and the prohibition of a religious test for office, the Constitution contains no mention of religion.

Under pressure from Alexander Hamilton, who said that “we should make the most of the religious prepossessions of our people,” George Washington reluctantly declared a Day of Thanksgiving on November, 26, 1789. Church historian Forrest Church submits that “it met a polite yet cool reception.” Trying to be as inclusive as possible, Washington referred to God as “a great and glorious Being,” but the Presbyterians complained that the text lacked “a decidedly Christian spirit.”

On May 9, 1798, John Adams declared a national day of “humiliation, fasting, and prayer.” It was so controversial (for the same reasons as Washington’s day of thanksgiving) that Adams believed that this act divided the electorate and cost him the 1800 election.

This is the problem with state sanctioned religious ceremonies: they are either diluted to accommodate everyone, and end up leaving the conservatives unhappy; or they prefer one religion or others and displease the liberals. This may be reason why in 1792 Congress refused to support a national fast, because, according to Church, “it recalled royal presumptions to sacral authority.”

In 1774 Thomas Jefferson proposed a resolution before the Virginia House of Burgesses for a day of “fasting, humiliation, and prayer” so that God would “turn the hearts of the King and Parliament to moderation and justice.” It passed unanimously and the British governor immediately fired the legislators as traitors to the Crown. Anti-British sentiment was growing in New England, and Jefferson and his fellow Virginians were eager to show support for their compatriots.

It is clear from Jefferson’s own comments on the prayer resolution that his vote was purely political and not a principled endorsement of state sponsored prayer. In his autobiography he states: “We cooked up a resolution to implore Heaven to avert us from the evils of civil war [and] inspire us with firmness in support of our rights.” Historian t Church explains Jefferson’s ploy: “Because the most conservative delegate was reluctant to vote against God and the most radical was delighted to press Him into service, the motion passed without dissent.”

Jefferson, “The Wall,” and the Connecticut Baptists

Thomas Jefferson was the first president to forego a call for a national day of thanksgiving. Inhis famous 1801 letter to the Baptists of Danbury, Connecticut, Jefferson introduced the phrase “a wall of separation between church and state.” In the final draft of the letter he deleted the idea of government sanctioned prayers so as not to alienate the Baptists as potential allies.

The Connecticut Baptists were well acquainted with Jefferson’s unorthodox religious views, but they trusted him far more than the Federalist Congregationalists in their state. They had established a Christian Commonwealth which levied taxes on and generally suppressed all other sects.

The Baptists believed that it was wrong for the Federalists to make Jefferson “an enemy of religion, law, and good order because he will not assume the prerogative of Jehovah [as the Federalists had done] and make law to govern the Kingdom of Christ.”

In 1808, taking aim at Jefferson and other “infidels,” the Connecticut legislature passed a law that made being a deist a felony. The New England Federalists were so concerned about Republican “atheism” that they threatened to secede from the Union. Only in 1811 did a coalition of Episcopalians, Methodists, and Baptists outvote the Congregationalists and disestablish their church, and only then did true religious liberty rule in the state.

Both Federalists and Republicans politicized religious issues, and it is good for us that the Republicans won because minority religions flourished in the aftermath of Jefferson’s savvy politicking. Jefferson was playing both sides of the Wall of Separation: insuring religious freedom for minorities and keeping the state as secular as possible.

Madison: There Shall be No Congressional Chaplains

Even though James Madison, known as the “Father of the Constitution,” believed that there should be none, the first Congress did appoint chaplains and paid them from the national treasury. As Madison argued: “The establishment of the chaplainship to Congress is a palpable violation of constitutional principles.” Madison also included military chaplains in his proscription.

Ironically, Jefferson and Madison laid the ground for the Great Awakening of the 1830s, where religious freedom led to the creation of new and lasting denominations. This movement proved Madison’sprediction that “religion and government will both exist in greater purity, the less they are mixed together.”

In 1832 Andrew Jackson decided not to issue the presidential proclamation for a national day of prayer and thanksgiving declaring: “I could not do otherwise without feeling that I might in some degree disturb the security which religion nowadays enjoys in this country in its complete separation from the political concerns of the general government.”

In 2010, following Jeffersonian principles, U.S. District Judge Barbara Crabb ruled that a federal law creating a National Day of Prayer was unconstitutional. She wrote that the law “connotes endorsement and encouragement of a particular religious exercise.” She allowed the celebration to continue pending appeal. President Obama went ahead and declared a national prayer day, but with this important provision: “pray or otherwise give thanks.”

For the first time in American history, Obama mentioned non-believers in his first inaugural address, and he also did not hold any religious services at the White House. This does not, however, make up for his decision to invite evangelical Rick Warren to give the inaugural invocation, praying in Jesus’ name and concluding with the Lord’s Prayer.

Obama vs. Trump on Thanksgiving Proclamations

In his 2016 Thanksgiving Proclamation, Obama did not use the word God or appeal to any specific religious doctrine. Rather, he reminded us that the “very first thanksgiving celebration brought together people of different backgrounds and beliefs, and every year since, with enduring confidence in the power of faith, love, gratitude, and optimism, this force of unity has sustained us as a people.”

Donald Trump’s 2017 Thanksgiving Proclamation brought God back with four references, and I submit that “Almighty God” and “Most High God” imply the biblical deity. As the foremost Republican in Early America, Jefferson would have obviously preferred Obama’s inclusive and fully secular formulation.

Early Republicans had a compelling motto: “Religion: we love it in its purity, but not as an engine of political delusion.” The belief that Americans can have non-denominational prayers that include all of us in this multicultural nation is indeed delusional.

Today’s Republicans have essentially betrayed two of the greatest achievements of their forbearers: Jefferson’s strict view of the separation of church and state and post-Lincoln views on civil rights. As Southern Democrats finally turned away from playing the race card, conservative Republicans have started playing it to their advantage.

One of my favorite cartoons about public prayer is the one featuring the late Sen. Jesse Helms kneeling in prayer. After failing to get prayer in the schools, he asks the Lord how Christian values can possibly survive. God answers in the last panel: “Don’t worry, Jesse, I can take care of it.”

Nick Gier of Moscow taught religion and philosophy at the University of Idaho for 31 years. Read his article on religion and the founders at webpages.uidaho.edu/ngier/foundfathers.htm. Email him at [email protected]