The Bonner County Board of Commissioners voted Tuesday to close both the 11 Mile and Wrenco waste collection sites, but not without tense discussion regarding public involvement leading up to Tuesday’s decision. 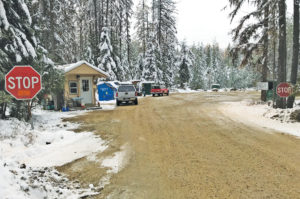 The closures come after recommendations from Great West — a company the county hired to help outline a 10-year solid waste improvement plan — and the recently appointed Solid Waste Advisory Committee.

The 11 Mile site, located north of Priest River, has been closed since Jan. 1. The collection site is in need of several improvements, but is located on U.S. Forest Service land, making improvements financially improbable. Solid Waste Director Bob Howard also cited “other safety issues” at the 11 Mile dump during a December BOCC meeting.

The Dickensheet and Prater Valley collection sites are the next best options for residents who frequent the 11 Mile location. Both locations are full-service sites, whereas the 11 Mile site takes only kitchen waste.

Commissioners voted unanimously to close the site, though Commissioner Jeff Connolly did question whether the public was engaged anytime during the process. Commissioner Dan McDonald said the Solid Waste Advisory Committee reached out to citizens near the site prior to recommending closure.

Howard said the county received a request for closure of the Wrenco site from Selkirk Fire, which has a station near the site. Great West and the Solid Waste Advisory Committee also recommended Bonner County shut down the unattended site and obtain a new, nearby location where proper facilities and oversight can be utilized.

Howard said that while the Wrenco dump is meant only to take kitchen waste, appliances, mattresses and the like are regularly found there.

“It’s a hazard and it’s a mess,” he said. “It’s more of a liability to the county than it is a benefit.”

Again, Connolly asked to what extent the people living near the Wrenco waste collection site had been engaged in the decision process. McDonald was adamant he’d heard many complaints from neighbors of the dump site. Connolly said he hadn’t heard anything, and felt a public hearing format would be appropriate before making decisions that he said seemed to lack public involvement.

“We’ve been talking about this and it’s one of the reasons we formed this committee of citizens — to do this leg work and make recommendations,” McDonald said, adding later, “Why even have an advisory committee if you don’t listen to them and you don’t trust them?”

The closure will take effect July 31. In the meantime, Bonner County Solid Waste is taking suggestions for where to build a full-service site nearby. Contact the office at 208-255-5681 ext. 2.