The Sandpoint Amtrak Train Depot turns 100 years old this month. I’ve got to say: For a century old, she still looks pretty good, although there was some extensive cosmetic surgery performed.

The Sandpoint Historic Preservation Commission (SHPC) invites the public to celebrate the Depot’s 100th birthday in style on Wednesday, Nov. 16, at Idaho Pour Authority, 203 Cedar St. The commission is hosting this event from 5-8 p.m. to help raise funds toward creating a Historic Walking Brochure for Sandpoint. 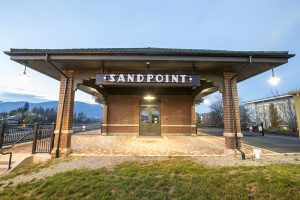 “This brochure will be available all around town and on the web,” said SHPC chairman Steve Garvan. “It will be a great tool for visitors and locals alike.”

The idea is to create a “walking tour” of the historic downtown district in Sandpoint, which includes several buildings on the historic registry. The Train Depot is currently classified on the national registry of historic buildings, while other locations such as the Heartwood Center, the Panida Theater and the Turner-Nesbitt House are recognized on the state registry for historic places.

Garvan said the need for a fundraiser stems from the reality of their commission’s meager operating budget: “We only have a $300-per-year budget, which is why we have to raise funds for this brochure.”

The fundraiser will feature a silent auction with items donated by local artists such as Leatta Judd and Dann Hall, live music by Marty Perron and Doug Bond, a raffle and lots of fun activities.

C is for Cake will be providing delicious desserts, and Laughing Dog Brewery will be supplying their local brews. There will even be a vertical flight of rare stouts and porters from 2007 to 2014. Proceeds from the event will go toward the creation of the brochure, which is estimated to cost around $5,000.

There will even be a surprise visit by a “conductor” with local historian Aric Spence, who will dress in an authentic conductor’s uniform.

“This is a great example of recognizing a program of buildings that were repurposed, but maintained their historical character,” said Carrie Logan, SHPC member and former mayor of Sandpoint who played an integral role in preserving the Depot. “My personal belief is that it’s important to know the past and the present because those inform how we move forward into the future.”

The SHPC is a group of devoted local citizens concerned for improving and protecting the city’s unique historic and cultural resources. They help facilitate the identification, evaluation, preservation, restoration, protection and enhancement of historical, cultural and archaeological interests. SHPC hopes to encourage and engage the preservation of historic architecturally significant properties, promote their potential, practical and useful opportunities and to establish compatible development within areas of historic properties, neighborhoods and districts.

The Train Depot was honored last May at the annual Orchids and Onions award ceremony, which took place at the Sandpoint Event Center.

“The city has put a lot of time, effort, energy and money into preserving historic locations,” said Dan Everhart of Preservation Idaho. “There’s a civic role that Sandpoint has played, at least in our minds, very well.”

For Garvan, the Orchids and Onions award ceremony was proof positive that Sandpoint cares about its historic buildings: “It was the biggest crowd and the most tickets sold in many years to one of their ceremonies. I was shocked pleasantly again at the huge turnout that came to the Depot for the ribbon cutting. Sandpoint really supports the Train Depot.”

The process to renovate and preserve the Depot was a long and arduous one, culminating in a cosmetic makeover that saved the structure from its likely demise.

Logan counts the Depot preservation as one of her worthy legacies while holding the office of Mayor of Sandpoint: “It makes me smile really big to see this happen. It was worth it. It was a lot of work. Kody Van Dyke gets a lot of credit for his ability to talk with BNSF.”

Come down to Idaho Pour Authority on Wednesday, Nov. 16 to support 100 years of history in Sandpoint. Donations are happily accepted. Here’s to another century!