In the exchange of letters and public debate about the proposed Scotchman’s Peak Wilderness it has been asserted that the ability to “manage wildlife” would be lost with wilderness designation. As a retired Idaho Department of Fish and Game Regional Supervisor for a region that contained a large portion of the Frank Church Wilderness I’d like to offer some context and perspective to “wildlife management” so readers can draw their own conclusions on how wilderness designation might impact wildlife management.

Idaho code declares all wildlife in Idaho to be property of the state, to be “preserved, protected, perpetuated and managed.”  The Idaho Department of Fish and Game was established as the agency charged with that responsibility. At its most basic, the status of a wildlife population is the product of reproduction versus mortality, and managing wildlife is all about balancing those. IDFG was given the authority to regulate hunter harvest and methods of take, which focuses primarily on the mortality side of the equation. The reproduction and survival side of the wildlife equation is influenced largely by the condition of the habitat and weather. 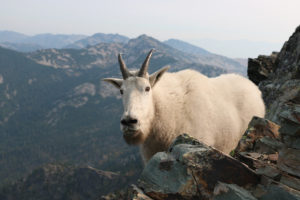 A goat on Scotchman Peak this summer. Photo by Leslie Kiebert.

Fish and Game biologists monitor big game herd status and recommend seasons and tag numbers to the Fish and Game Commission that will assure adequate females remain in the herd and meet hunt quality objectives. Status of big game herds both in and outside wilderness are assessed from Mandatory Hunter Report information from those who hunted in or outside wilderness. In southern Idaho, with less forest cover, that information is supplemented with aerial observations conducted both in and outside the wilderness.

On occasion biologists have the need to physically get their hands on live animals for research purposes or to transplant individual animals. In remote areas that generally requires landing a helicopter, not ordinarily allowed in wilderness.Habituated mountain goats have injured at least one person in the proposed Scotchman Peak Wilderness area (a hiker was killed by a habituated mountain goat in Washington State some years ago) and the need could arise to capture and relocate problem goats.

In the new Owyhee Canyonlands Wilderness Area, where Fish and Game has a history of frequent helicopter capture operations of Bighorn sheep to monitor a disease in the herd as well as transport sheep, language was built into the authorizing legislation that makes provisions for Fish and Game to continue those activities. For other wilderness areas, there is an established process for coordination between the state wildlife managers and the federal wilderness managers (generally the Forest Service) to evaluate the specific wildlife management needs and allow helicopter landings in wilderness.

In my assessment, Fish and Game’s ability to manage wildlife would not be significantly impacted by wilderness designation for the Scotchman’s Peak area. But I suspect most references to the impact of wilderness designation on wildlife management have been references to the restriction on timber harvest. Early succession vegetation (e.g. “brush”) and openings that result from timber harvest (and fire) can indeed be beneficial to big game by increasing the amount of forage.

The Idaho Department of Lands has a narrow mandate only to generate revenue from state lands. The Forest Service does incorporate wildlife considerations and IDFG recommendations in developing parameters for timber sales, and may compromise potential revenue to do so. But other than small demonstration projects, timber sales are not conducted with wildlife management as the primary objective.

And unfortunately the wildlife benefits of timber harvest are often more than offset by the creation of new roads and increased motorized access.  Decades of research has shown that the number of elk per square mile is inversely related to the miles of open roads per square mile. Research at the Forest Service’s Starkey Experimental Forest near La Grande, Ore., revealed that satellite-collared elk dispersed as much as 2,000 yards when motorized vehicles, both full sized vehicles and ATVs alike, came in proximity. An important part of wildlife management is IDFG and the Forest Service working together to designate and enforce road closures following timber sales.

Because of the impact of ATV traffic on big game and the big game hunting experience the Fish and Game Commission, with support from the majority of hunters, has put in place a regulation that makes it unlawful to hunt from an ATV in 30 of Idaho’s 98 Big Game Units.

Much energy has gone into challenging individual opinions about wilderness designation. It can’t be challenged that not everyone wants the same type of hunting experience. Fish and Game has a feature on its web page called the “Hunt Planner.” It prompts the user to make choices on what type of hunting they are interested in and then suggests hunting areas, seasons and tag types. At one point it asks “What type of hunting experience are you looking for?” Choices are farm/ranch, managed forest, primitive backcountry or wilderness. For someone who indicates that they are interested in hunting in the Idaho Panhandle and then selects “wilderness” — it comes back “No hunts found.”

I leave it to the reader to conclude whether or not the ability to manage wildlife in the Scotchman’s Peak area would be lost with wilderness designation.