When music changed the world

In early times, songs were passed down by generations like oral histories. Even two or three generations back, songs had to be experienced either in a person’s home or gathered with others in a public performance. But with rapid technological innovations in the late-19th and early-20th centuries came the ability to share these oral histories — or songs — with more than just one’s own tribe.

Of course, in the 21st century, music can be enjoyed anywhere and at any time; and, being a universal language, it holds the power to share culture with a larger society. Likewise, a good song can hold up a mirror to millions of listeners — sometimes, literally changing the world. Here are a few times in history when that occurred.

‘A declaration of war’

Prior to the 1930s, music hadn’t directly confronted heavy issues such as racism and segregation in the United States. Venues at the time were mostly segregated, with famous Black musicians often labeled “Uncle Toms” for playing to mostly white audiences where the money was better.

After Billie Holiday performed Abel Meeropol’s “Strange Fruit” in 1939, the founder of Atlantic Records called it, “a declaration of war … the beginning of the Civil Rights Movement.”

The song came to symbolize the brutality and racism of the practice of lynching in the American South.

One glance at the lyrics reaffirmed the controversial nature of this song: “Southern trees bear a strange fruit / Blood on the leaves and blood at the root / Black bodies swinging in the southern breeze / Strange fruit hanging from the poplar trees.”

Meeropol wrote “Strange Fruit” after seeing a postcard showing crowds of people picnicking under hanging Black bodies. When Holiday wanted to sing Meeropol’s poem (which he’d also set to music) in 1939, her record label refused to allow her to record it. She ended up getting released from her contract especially to record the song. It was the first time a Black artist had sung such controversial lyrics to a widespread audience.

The song has endured, becoming a symbol of the racism, cruelty and suffering endured by so many in the U.S. In 1999, Time magazine voted “Strange Fruit” the Song of the Century. It may have indeed been a catalyst to opening the race discussion in America in earnest, ultimately giving way to the mid-century Civil Rights Movement.

One thing is for sure though: it’s a haunting and beautiful song that still gives me goosebumps when I hear it.

It’s impossible to explain the cultural impact of the 1960s without discussing the influence that Bob Dylan’s songwriting and music had on the generation that came of age during the period. When Dylan wrote “Times They Are A-Changin’,” which first appeared in the album of the same name in 1964, it galvanized the general feeling of the 1960s counterculture.

Characterized by the rejection of racial segregation and oppression and the overall sense that the U.S. needed to change, “Times They Are A-Changin’” was written in just ambiguous enough a way that subsequent generations have dusted it off and used as their own anthem. It’s still as prophetic and powerful today as it was more than 50 years ago.

Considered the first benefit concert of its kind, Live Aid changed everything. Organized in 1985 by Bob Geldof and Midge Ure, Live Aid raised $127 million for famine relief in Ethiopia. The concert was held simultaneously in London and Philadelphia, with a total of 172,000 attendees and an estimated global audience of 1.9 billion across 150 countries — around 40% of the world’s population at the time.

In 1985, an audience that large for a concert was unheard of, and the result was a massive success. The organizers were able to catapult to the forefront an issue that was nowhere on the political agenda, causing countries around the globe to band together to help relieve an unprecedented famine in Ethiopia.

One of the best performances to come out of Live Aid was Queen’s live set at Wembley Stadium in London. The iconic set was recreated flawlessly in Bohemian Rhapsody, the recent biopic about lead singer Freddie Mercury’s life. Search “Live Aid vs. Bohemian Rhapsody” on YouTube for a fascinating side-by-side comparison of the actual event and the movie.

When Bob Marley gained a worldwide audience for his iconic sound of reggae infused with ska and rocksteady, he became an unlikely worldwide star.

Marley’s “Get Up, Stand Up,” is one of many of his songs that serve to unite the oppressed. In the song, Marley urges listeners to recognize injustice around them and to stand up for their natural rights.

In the years since, Marley has evolved into a global symbol that reaffirms the power that people hold, no matter where they come from or what voice they use. Marley’s life and work has been viewed by many Indigenous communities as a global symbol of fighting oppression.

Since his death in 1981, Marley has been honored with an Order of Merit from his home country of Jamaica, inducted into the Rock and Roll Hall of Fame and Rolling Stone ranked him No. 11 on its list of the 100 Greatest Artists of All Time. 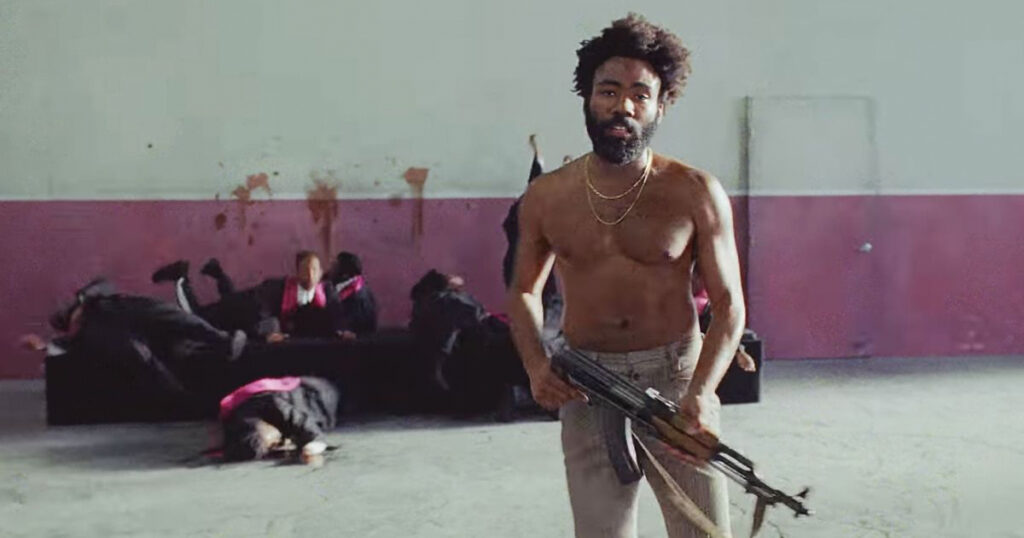 Donald Glover (a.k.a. Childish Gambino) in the music video for ‘This is America.’ Courtesy image.

What “Strange Fruit” did for racism in the 1930s, “This is America” has done for gun violence in the U.S. in modern times. Performed by rapper Donald Glover under his stage name Childish Gambino, “This is America” is not just an alarmingly good song. The video that accompanied it was also shocking and powerful — well deserving of its title as one of the most talked about music videos of all times.

The one-two punch of a good song and amazing video helped debut the song at No. 1 on Billboard’s Hot 100 chart — making it only the 31st song in history to do so.

When paired with the video, in which Glover dances in stereotypical Jim Crow-era performer style and abruptly guns down various people with brutal casualness, this song rises to “change the world” status. Rightly so.