Last week, while GOP senators were scrambling to find enough votes to pass a repeal for the Affordable Care Act (a fight they ultimately lost), President Trump fired off a series of tweets which seemed to come out of nowhere.

“After consultation with my Generals and military experts, please be advised that the United States Government will not accept or allow Transgender individuals to serve in any capacity in the U.S. Military,” Trump wrote. “Our military must be focused on decisive and overwhelming victory and cannot be burdened with the tremendous medical costs and disruption that transgender in the military would entail. Thank you.” 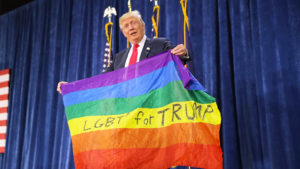 Then-candidate Donald Trump posed holding a rainbow flag with “LGBTs for Trump” written on it at campaign rally at the University of Northern Colorado on Oct. 30, 2016

The tweet would ultimately reverse a 2016 ruling by former Defense Secretary Ashton Carter that lifted the ban on transgender people serving openly.

We have made big strides toward cementing freedoms for all in the United States, but this seems like yet another step backward from the Trump administration.

I spoke with a few folks I know in the community who have served in the military to get their reactions to the tweet. Here are their responses, presented as their own candid views:

Cpt. Bill Collier, served as a helicopter pilot in the Vietnam War. He has written three books about his experiences, one of which is soon to be released. Stay tuned.

I attend about three meetings every month in Sandpoint at which we recite the pledge to the flag of the United States. Every time I choke on the last few words, “…with liberty and justice for all.” Daily I am reminded that we are still a long way from that ideal.

We are all citizens of this great country and are guaranteed our right to pursue happiness by our great CONSTITUTION. This is called freedom for all. ALL.

Barney Ballard, USAF, flew as a Forward Air Controller during the Vietnam War. He is an advocate for aviation and education in Sandpoint.

Given the difficulty of serving in the military at a time when many of our armed forces have been deployed four or five times to regions of continuous war, it is ironic that our president would exclude from the services those wishing to serve their country, specifically transgender people. Citing the burden of “… tremendous medical costs,” I would ask the man who never gave service to our country if the expenses to care for veterans with multiple combat deployments or exposure to Agent Orange and radioactive ingredients has been computed into his tweet.

Blusterers and bloviators, such as Trump, are of a political base of “chickenhawks” who advocate aggressive use of our military but know nothing of the really horrible consequences of war. The greatest irony is that he never experienced the life changes war entails. For he, who has been given so much, has always been a “taker” and has grabbed whatever he pleased. His attitude has always been that others should do the “grunt” work while he takes that to which he is entitled. To exclude a transgender person who wants to serve is not an example of leadership given his specious reasoning, but is purely a political pitch to a bigoted audience.

I have served with LGB soldiers. I have not experienced any issues serving with LGB soldiers. As for transgender, I’m not aware of any I’ve served with. I may have, I don’t know. Once you put the uniform on, what matters is, can you do the job and follow the directions of those appointed over you? So I don’t really care, personally.

The transgender policy has not yet been fully enacted… As a North Idaho guy, I am more conservative than some. Speaking for myself, as a private citizen, openly-serving transgenders don’t really fit the definition of the word uniform. I’m in no way alleging that a transgender soldier is incapable. They may be. I just don’t know how well that would work out. I know I’m serving with LGB and look, no one cares. It’s not our business.

There has been no official guidance yet about the president’s tweets, but there has been a transgender policy in place (from the Obama Administration in 2016). We’ve received training on it. I would suggest you look at it. …

If that policy is enacted it is going to create just as many problems as it solves, at a minimum … a transgender soldier who has gone through the (new policies) process but not physically transitioned can choose their facilities, and everyone else must accept this … That can be a challenge for some service members, especially if they haven’t gone through the transition. If your assigned gender is female, you utilize the female latrines, female showers and those female servicemembers do not get a chance to express any reservation. … No one has seen it done, though.

The U.S. Military is an institution that is one of the most discriminatory possible. If you’re a diabetic, you can’t serve. Old people can’t serve. As a high school teacher watching young men and women try to get into the armed services, there are a slough of conditions that do not provide you with the opportunity to serve. It’s up to the president, whether it be Obama or Trump, to set forth that policy. So I’d tell you, unless we want to be open- minded and let everybody serve — to let 80-year old men and women serve in infantry conditions and do those tasks — I’m very comfortable with those tweets. In my experience, I think that I’d prefer it that we remain true to our purpose, to protect and defend the United States. At the same time, I’ll also tell you if the president says we serve with transgender soldiers, that’s what we do. We raise our right hand and protect the Constitution. It’s not my call.

Ed Karasek fought in the Vietnam War and was wounded in battle near Hoi An. He currently lives in Sandpoint.

I was in the Marine Corps from ‘66 to ‘69, and during that time LGBTQ wasn’t even an issue. I’m sure I must have served with some gay people, but back then they hid such things, so I did not know of any of them at the time.

I think the relevant issue here is Trump lying to the LGBTQ community about how he would “protect them” while claiming Hillary wouldn’t, and even more relevant is the military’s experience in following Ash Carter’s order to integrate them. There have been no reported problems of any kind and no claims that they haven’t carried their own weight, so to say.

So what is the problem? Mostly it would seem Trump. He claimed to have discussed this “with my Generals” but to date no general has stepped forward to corroborate this apparent lie.

It appears this is an attempt to keep the cultural wars going and to rile up Trump’s Evangelical right-wing support.

Congress should step in and block him, and if they don’t, I believe the courts will. And should!