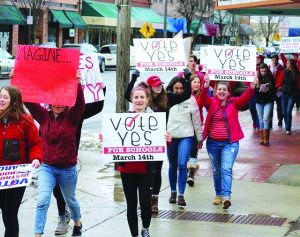 Of the 7,799 votes cast in the local education referendum, 4,991 voted yes and 2,806 voted no, according to the preliminary Bonner County Elections results.

“We are very excited and grateful to the community,” said LPOSD Superintendent Shawn Woodward. “This was our highest turnout for a supplemental levy ever, our second highest passage rate.”

Compared to the 2015 levy, this year’s effort brought over 2,700 more people to the polls. On the other hand, turnout was just a shade lower than the vote on last year’s LPOSD school plant levy, a $55 million proposal to reconstruct school buildings. It was defeated with 5,493 votes against and 2,953 in favor, representing a 50.5-percent turnout of registered voters.

Nervousness over the security of the supplemental levy following the defeat of the plant facilities levy likely provoked more spirited advocacy from LPOSD supporters. Discussion took place every day for weeks over social media, and supporters marshaled volunteers for door-knocking campaigns and parades.

Opponents, meanwhile, questioned the school district’s trustworthiness and balked at its increase from the previous levy of $15,767,484. They argued that the levy request should be turned down and replaced by a levy proposal with a zero-percent increase.

Now passed, the 2017 supplemental levy will collect $17 million over a two-year period from property taxes within the district. That totals to a $0.50 per-month increase on a $250,000 property with a homeowner’s exemption, meaning a current annual levy bill of $264 would increase to $270 in fiscal year 2017-18 and $276 in fiscal year 2018-19. Upon its expiration in two years, the district school board will have to pass another levy should it decide that local funding remains necessary.

“We are thrilled with the show of trust from the community,” Woodward said. “In return, we will maintain our focus on continuous improvement.”

It was altogether a good day for supporters of school bonds and levies across Idaho. According to Idaho Education News, a vast majority of the proposals passed, totaling to $695 million for Idaho schools. Boise voters passed a $172.5 million bond by an 86-percent landslide of 22,084 to 3,595 votes. Likewise, a 10-year, $160 million plant facilities levy passed in West Ada, and both a $35.5 million bond and two-year, $32 million supplemental levy passed in Coeur d’Alene.