A trail is more than a place to ride a bike, walk your dog or exercise your horse. A trail is a community asset; it is part of the infrastructure that makes a place livable. Just like schools, hospitals, parks and sidewalks, a trail network is an amenity that makes a town a better place to live and a more desirable place to visit. 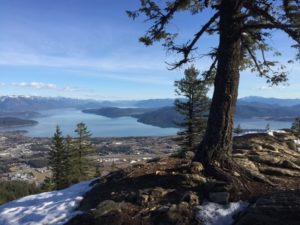 The term “trail town” has entered the lexicon of those who work in rural economic development, which can be understood simply as “improvements in a community’s wealth and health.” Trails are increasingly contributing to both economic opportunity and increased livability in rural areas across the West.

There are several trail towns within a day’s drive of Sandpoint, familiar to local hikers, mountain bikers, hunters, nordic skiers or equestrians who have made road trips to towns like Fernie, British Columbia; McCall, Idaho; or Winthrop, Wash. In each of these communities, collaboration between user groups; city, state, provincial or federal officials; and private landowners have led to the development of world-class trail networks that have increased quality of life for residents and paid for themselves many times over through increased economic activity.

One example of a frontcountry trail is the 42-mile Whitefish Trail, a popular destination for visitors, 70% of whom plan to use the trail when visiting Whitefish. The average visitor spends $278 per day in local businesses, creating income and jobs for the accommodation, food and beverage, and retail industries. According to an analysis of the economic effect of outdoor recreation and the Whitefish Trail by Headwater Economics, 68 jobs and $1.64 million of additional spending are realized annually as a direct and indirect result of the trail’s impact on tourist visits.

A trail network can result in increased recreation spending by locals as well. The average Whitefish resident who uses the trail spends $1,400 annually on recreation-related gear and services at local businesses, compared to only $660 by those who do not use the trail. In total, $6.4 million of additional income is earned by local businesses and households each year due to trail-related spending.

How does this compare to the cost of the trail? Between 2009 and 2017 the total amount spent on the development, maintenance and operation of the Whitefish Trail was $1.89 million dollars, or an average of $236,250 per year. Even these costs can be seen as an economic benefit for the community, as they also support jobs in construction, recreation, education and conservation. Seen as an investment, the Whitefish Trail provides the community an annual return of around 3,000 percent.

Economic development is about more than the financial costs and benefits, however — the quality of life of a community’s residents is also positively affected by trail networks. When asked why they moved to or choose to stay in Whitefish, residents identify summer recreation as the most important factor, ranking it above community, job, family and friends. The No. 1 reason residents use the Whitefish Trail is for their health, followed by access to open land, to exercise their pets and for social opportunities.

Sandpoint today is an aspiring trail town and there is momentum toward expanding and connecting our disparate frontcountry trail networks in partnership with private and public landowners. Examples include the effort by the Pend Oreille Pedalers to improve and expand the existing network of mountain bike trails on city property in the Schweitzer Basin and Kaniksu Land Trusts’s collaboration with Sandpoint Nordic Club to develop a new nordic skiing, hiking, mountain biking and winter fat biking trail network in Pine Street Woods.

Continued development of our local frontcountry trails will undoubtedly result in similar development outcomes for Sandpoint as those other trail towns have experienced, promoting business opportunities and improving the quality of life for Sandpoint residents.

Jason Welker is an economics teacher, a board member of the Pend Oreille Pedalers and business administrator at a local nonprofit working in outdoor recreation.