The timeless thrill of winter stoke

Warren Miller’s name is practically synonymous with “ski movie,” and rightly so — it’s an association cemented by 70 years of ski and snowboard films, and a legacy that will live on long after the eponymous director and adventurer’s death last year at 93 years of age. 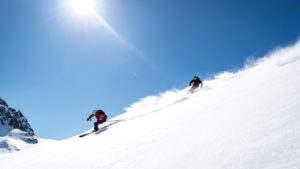 Warren Miller’s Timeless, released in October, takes audiences on the kind of trip that Warren Miller fans have come to anticipate, bringing together stunning mountain and snowscapes alongside retro footage interspersed with feats by today’s elite snow riders.

Those jaw-dropping stunts play out in breathtaking locales ranging from British Columbia to the Colorado Rockies to the Swiss and Austrian Alps.

As Miller famously stated, “If you don’t do it this year, you will be one year older when you do.” Don’t wait to be a year older before you see Timeless, which comes to Sandpoint with a screening Saturday, Nov. 9 at the Panida Theater.

While much has changed since Miller pioneered the ski movie back in 1949 — and this year’s entry marks the second film since his passing in January 2018 — Timeless seeks to underscore the changeless thrill of taking to the mountains and the passionate pursuit of winter stoke.

As much about travel and experience as it is the skill, culture and camaraderie of snowsports, Timeless brings viewers to some of the most incredible ski destinations in the world and celebrates inspiring athleticism from some of the world’s finest downhill skiers, snowboards and cross-country skiers.

Presented by Volkswagen, Timeless has been and continues to be on tour worldwide, with showings in Australia, Central Europe, New Zealand, the United Kingdom and the United States. The Sandpoint show is one of only three in Idaho, with screenings Nov. 14 in McCall and Nov. 21 in Boise.

To borrow another quote from the late, great Miller, “We snowriders are the most fortunate people on this planet earth.” Same goes for lovers of a good ski and snowboard film — especially if they’re lucky enough to live in a ski town like Sandpoint and have plans to see Timeless at the Panida.