Determination, perseverance, preparation? Nonsense. Knowledge, ambition, experience? A myth. A firm handshake, a shine on your shoes and a smile? Baloney.

Such weary bromides and homilies are for naive dimwits and also rans. I learned early on that the road to advancement and power is paved not with goal-setting and steady accomplishment. Not loaded briefcases and working weekends. Not arriving early and leaving late. No indeed. Deceptiveness and deviousness are what get one to the top. The secret to success is razzle dazzle. Flimflam. The ol’ bamboozle. Or, as Jacob, a chef at Sandpoint’s Thai-Nigiri restaurant curiously proclaimed, “You don’t sell the steak, you sell the sizzle.” (Curious, because Jacob is a sushi chef).

The first occurred while fighting the Korean War in the early 1950s as a military newspaper editor in Albany, Ga. My draft dodging USAF buddies and I started attending the Byne Memorial Baptist Church. That’s where the cutest Georgia belles hung out. We organized a church softball team and won the city night league. I played first base. Our third baseman, George Snyder, from Massachusetts, had played some semi-pro. He threw the ball so hard that several times it knocked me down. I was better at choir.

During World War II, as noted in a previous Reader, I attended a summer camp in California’s San Bernardino Mountains. It wasn’t a music camp, but it was a singing camp. Some years later I was on staff there for several summers. So I learned a lot of songs. The camp was not church-related, but co-owner “Mother” Preston was a zealous Baptist. In compiling the camp songbook, she had swung a big stick. For a secular camp the song book bulged with church songs. “In The Garden.” “He Lives Today.” “Climbing Jacob’s Ladder.” And a passel of others. 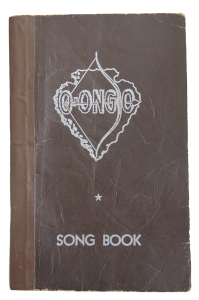 Leap ahead to 1953. Because there were hot Georgia belles in the Baptist church choir, we softball jocks became vocalists. It didn’t take long for the choir director and other church movers and shakers to recognize a committed Christian lad when they heard one. Having learned all the religious pop hits during Camp O-ongo summers, I belted them out with the gusto of a Billy Graham clone. However, I had joined the choir not out of religious fervor but because a leggy blonde named Peggy sang in it. (I dated a number of lovely Dixieland girls while fighting the Korean War in Georgia. Regrettably, none of them even vaguely resembled Ole Miss University activist Sandra Bullock in the film, “The Blind Side”).

Byne Memorial Baptist Church was nothing if not organized. Young adults like us who attended there were automatically BYU members. BYU had nothing to do with the Mormon-owned university in Utah known for quarterbacks and Mitt Romney. The initials stood for Baptist Youth Union. Unknown to the church hierarchy, I knew precious little about The Good Book. I thought a psalm was spelled palm and was a tree. Or a tony California desert town with the last name of Springs. But thanks to Camp O-ongo I bellowed out those Baptist songs like a budding tent revivalist. Within days of my arrival in the choir I was elected president of the BYU.

Another mandate to lead as a result of deception and trickery occurred a couple or so years later, in college in California. Because I had edited a weekly Air Force newspaper in Georgia I was named managing editor of the school paper my first week on campus. An advisory board invited me to be editor in chief, but the professor in charge—a suspicious, phony, no-account weirdo, incompetent oaf and loser who thought he smelled a rat—asked me to define a split infinitive. I couldn’t, and someone else got the top job.

Borrowing my mom’s new blue Oldsmobile Rocket 88, colleagues and I sped from SoCal up through the San Joaquin Valley to Sacramento. We sped on a narrow, two-lane highway, eventually to evolve as multi-lane Interstate 5, thanks to President Eisenhower. Our target was the annual convention of the California Intercollegiate Press Association. I hadn’t a clue what that was. Upon arrival we found that members of a Young Democrats club from another university had rigged the upcoming vote for association president. Their candidate was unopposed. The moderator was pleading over the loudspeaker for additional nominations. A fellow Long Beach journalist asked if he could put forth my name as a token candidate. A mild protest as a matter of principal. With a furtive glance at my crutches, I agreed.

As luck would have it, I had recently busted my knee—not fighting overseas, but skiing at Lake Arrowhead. Naturally, my friend introduced me as a Korean War veteran, which I sort of was. And when I hobbled painfully down the aisle on crutches, which I actually needed in order to walk, hopeful murmurs rose throughout the packed auditorium. Apparently enjoying the sudden acclaim and celebrity, I failed to mention to the newly excited assemblage that I had served my country not in North Korea, but away down south in Dixie. And in Dixieland I took my stand not with a tank but a typewriter. In nearly three years as a fighting man I never held a gun. My apologies, NRA.

In a secret ballot the student voters patriotically elected me president of the California Intercollegiate Press Association! Fraud at its finest. But we won. I mean, it’s not how you play the game, but that you win it. When the victorious Long Beach contingent headed for the elevator, the Young Democrats slammed the door in our faces. Several held fingers in the air in tribute to me—their battle-hardened, heroic new president. You know, as in “We’re number one!” Except, thanks to razzle dazzle, flimflam and the ol’ bamboozle, they weren’t.