Submariners at the Hilton Bar 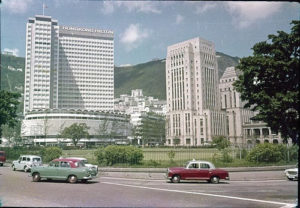 On the prowl, I took the elevator up to the Apollo Lounge. I frequented it enough that I knew Kip, the hostess, by her first name and even gave some thought to dating the tiny Nepalese cutie. I knew that the Pan American stewardesses were due to appear shortly. Their flight should have landed an hour ago. They always came to the bar after checking into their rooms and freshening up a bit. No Pan Am stewies in sight tonight. Drat! Their flight must have been delayed. No one from the “UP” singles club either. I anticipated a lonely, boring night. I departed the lounge, bounding down the stairs, when I spied Kip talking to two beautiful young American ladies, in their early twenties. Kip was explaining to the young ladies that unaccompanied women were not allowed into the bar. The ladies could not comprehend that Kip might think them to be prostitutes and were trying to argue with her to gain access to the bar.

I instantly assessed the situation and I said, “Kip, these young ladies are with me. I have been waiting for them.” I turned to the young ladies and said, “Where have you been? You’re late! I had given up on you, and I was just leaving. Let’s have a drink.” I don’t know that Kip actually believed that I had been waiting for these girls, but she let them pass. We adjourned to the bar and began to get acquainted. My good friend, Gary, was coming to join me in Hong Kong the next day. I now had dates for both of us.

We went to the San Francisco Steak House, which was right outside the door of the Hyatt. We did not often get real food where we worked, so it was a nice touch for us to get American steaks, fresh salad and such.

We always ordered wine, too. It was a bit expensive, but we could afford the place. I often made this toast: “To good food and good wine and good times, all made better by the presence of good friends!”

I always have been a very good speller. In our small studio apartments, Gary and I would often be in our respective bedrooms writing letters. Sometimes he would ask me through the paper-thin walls in a normal conversational voice how to spell some word. I would tell him. At some of the steakhouse dinners, he would brag about how well I could spell and ask our companions to challenge me to spell any word. For some reason, people frequently asked me to spell “rendezvous,” which I always spelled correctly. That was too easy. Someone asked if I could spell a word alphabetically. A sample of this would be rendezvous: d- e-e-n-o-r-s-u-v-z. When we tired of that game, I would spell words alphabetically backwards: z-v-u-r-s-o-n-e-e-d. I won a few drinks doing that. For me it was simple, I just visualized the word in my mind and picked out the letters in sequence.

After a steakhouse dinner with the two young ladies, we adjourned to the DEN nightclub in the basement of the Hilton Hotel on Hong Kong Island. It was a classy place and drinks were expensive. My intention was to get to know the girls better, choose one and separate her from the other. We sat at a nice table at the edge of the bistro, near the window overlooking the pool on one side and the dance floor on the other side.

At a table near us sat an elegantly dressed French couple out for a night on the town. Five young men also occupied a third table near us. It soon became obvious to me that they were young U.S. naval officers from a submarine in the harbor. They were pretty high and getting more boisterous by the moment. One of them made a feeble effort to join my table and snake one of the ladies away from me, but he did not go so far as to join us. He had a higher priority at the time. They were celebrating the fact that one of them had, that very day, received his coveted golden Dolphin wings and was now a qualified submariner. It was a big deal to them, and they intended to celebrate it in their customary manner. (I could relate. I remembered the joy of receiving my golden Naval Aviator’s wings in December of 1965.

Their celebration usually culminated with throwing the newest member of their elite group into the ocean or bay wherever they were anchored. They bantered about the idea of hauling the new guy out to the Hong Kong harbor and throwing him off the pier, but nixed that idea immediately. At that time, Hong Kong harbor was  one of the nastiest waters in the world. They wanted to initiate him, not infect him with a dozen communicable diseases. 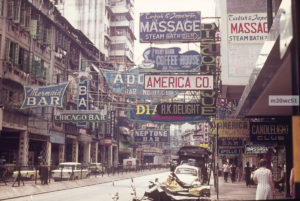 They discussed throwing him into the hotel pool, which was in plain sight right outside the windows. One of the fellows went out to the pool, and returned with the bad news that the pool was locked up for the night. Drat! No dunking there. I overheard them talking about taking the victim up to a hotel room and submerging him in a bathtub full of water, and they even jokingly discussed stuffing him down a toilet, but no one would buy these meager offers.

In one of those magical moments when everybody clicked on the same frequency without anyone verbalizing it, the other four submariners decided they would dump their full beers onto the initiate. They all stood up, grabbed their full mugs and slung the contents towards the intended victim. The inductee must also have been tuned into the mental telepathy and knew the beer was headed his way. Just as the beer took flight towards him, he ducked down, out of the way of the in-coming beer-fall. Four mugs of beer flew past him, splashing upon and soaking the elegant French couple.

Hell broke loose as the Frenchman exploded in a rage. Imagine a cigarette pack-sized nuclear device going off in an enclosed space. It was not a pretty sight. I am sure this incident added to the negative impression of “Ugly Americans.” The submariners were evicted from the bar. They left peacefully.

As things quieted down, I cut one of the sweeties, Janet, away from the other. Janet was medium height, had soft brown hair and hazel eyes, and an effervescent personality. She had just completed a mid-west college and was on tour with her parents and brother. The two of us sat in the coffee shop in the Hyatt Hotel all night long getting to know each other. My good friend, Gary, showed up the next day and the four of us hung out in and about Hong Kong for a few days. Janet and I corresponded for months. We dated for a while after I returned to northern California. 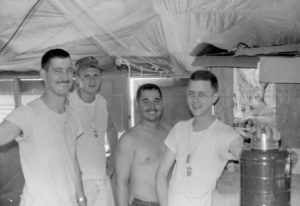 Meeting pilots inspired Janet to become a flight attendant. She flew for Trans International Airlines for years afterwards. Our paths never crossed while she was flying. This beautiful young lady is still a dear friend. Last I heard, the other girl, petite Celine, moved to Japan and married a Japanese businessman.

Later that week, Gary and I attended an UP Club function, a spaghetti-eating contest at a local restaurant. Both Gary and I considered ourselves big eaters and were sure that one of could win this contest, no challenge. We lost to a skinny little Italian fellow. The Italian and I got our pictures in the Hong Kong Post Herald.

This story is an excerpt from Captain Collier’s book,