It was a good weekend for Sandpoint soccer clubs.

Both the Grey Monarch and Green Monarch Futball Clubs brought home the gold at the 44th Julyfest soccer tournament in Kimberley, BC, last weekend.

The young-buck Green Monarchs fell in the qualifying round but rebounded to easily win the B-league championship, while the old-bone, viking-spirit Grey Monarchs fought off numerous Cannucks and some eastern Europeans to claim gold. 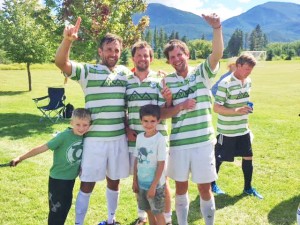 Sandpoint’s Green Monarchs Futbol Club (GMFC) was established sometime near the turn of the recent century. Many of the founders have aged into retirement, careers and family life, but a few old-buck silver foxes have seasoned, transitioned and continue the club’s dominance in the masters division.

For the past few years, GMFC has fielded a 35-and-up masters team, default-named the Grey Green Monarchs. Due to the deep Sandpoint soccer tradition, the Greys’ roster grows deeper and stronger with each passing year.

“Adding a second team to the club has long been an objective,” said local physical therapist Hal Schmidt. “It benefits the club and community, and it also gives us old dogs a place to lay.”

Schmidt is fully recovered after a debilitating broken jaw due to a Canadian hockey check on the soccer field during Julyfest 2014.

“We didn’t have to play that card, but having the tourney director rostered assures us extra fair treatment,” said Sandpoint’s Casey McLaughlin.

Here’s a quick encapsulation of the action last weekend.

Only capitalizing on one of their 18 shots, the Greys escaped with a tie against Calgary’s Blue Steele, who missed their own winning goal not once but twice in the final minutes, against a beleaguered and meager Monarch defense.

The Greys turned it around Saturday afternoon and found some precision in their passing and scoring, resulting in a 4-0 win against the Rangers Athletics who hail from somewhere far, far away. Keeper Alan Brinkmeyer posted the shutout for the Greys.

The Greys had never advanced beyond the semi-finals before. They faced their nemisis from Calgary—the Chinook Red Elephants.

In the opening tenth minute, after the whistle called play dead, a Calgary enforcer shoved and flat-backed a meek-but-wise Grey Monarch, resulting in the bruiser Elephant’s ejection and shifting the momentum from the Reds to the Greys. The Monarchs played a man up for the remainder of the game, advancing to the finals 1-0.

The win came with its casualties. Valuable Grey Monarch warhorse defender J.P. Huguenin cracked skulls and lacerated his forehead. He sat out the finals with numerous stitches.

The Greys surprised all with fresh 35-year-old talent and collegiate veterans on waivers from the Montana Rapids Premier and Salt Lake City.

The Greys went up early. A White House striker from the former Soviet bloc then evened the match 1-1 midway though the first half. Ryan Billett, from the Kalispell area, had been struggling to find the net, but sealed the deal when it mattered most, tallying a late goal to secure the Grey Monarch’s first Julyfest masters division championship.