Sandpoint’s population is on the rise, but like any growth spurt, it carries with it an awkward phase or two.

Many of them are apparent to even the casual observer. The Reader has already covered the recent difficulties many have encountered in securing affordable rentals. Sandpoint city officials, meanwhile, are nervously eyeing another growth benchmark that could put a major revenue source on borrowed time. 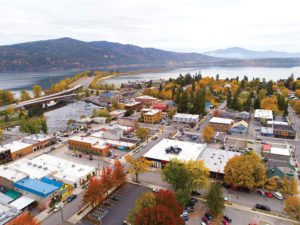 Sandpoint is one of 14 Idaho cities allowed to utilize local option taxes. Originally implemented in 1978 as a tool for counties under 20,000 population, it was amended in 1984 for cities under 10,000 population with a heavy economic reliance on tourism. The state statute allows for qualifying cities to implement taxes on hotel stays and by-the-drink liquor sales, passing a portion of the tax burden to the tourists who create their own strain on public services and infrastructure.

Problem is, Sandpoint is rapidly approaching the population limit of 10,000, at which point, it no longer qualifies for resort city revenue. It’s a problem that could have serious consequences if the 2020 U.S. census tips the city over the mark.

“The artificial population cap is contrary to the voice of our voters and is not in the best interest of our residents, businesses and visitors,” wrote Sandpoint City Administrator Jennifer Stapleton in a whitepaper. “It is ultimately detrimental to our community.”

“Our own estimates based on city utility and housing vacancy data project that our city population will likely pass the 10,000 resort city threshold in the 2020 census,” she wrote. “If not that year, then definitely within the next one to two years.”

Sandpoint has relied on resort city taxes for nearly two decades. Voters approved the first, a 5-percent tax on local hotel stays, in 2002. In 2015, voters increased the tax to 7-percent and renewed it for another 10-year run. The hotel taxes, which funds public transportation, police and fire protection, parks, Memorial Field reconstruction, invasive species control and the local interpretive center, specifically target tourists who rent rooms on a short-term basis of 30 days or less, shifting the tax burden away from locals who support city services through utility bills, property taxes and other revenue sources.

But not all taxes permitted under the resort city law are designed with tourists in mind. A sales tax approved by voters in 2015 hits both tourists and locals alike for the purposes of recreation funding. Voters approved it with a 73-percent majority for the reconstruction of War Memorial Field and its crumbling grandstands, with overflow funds directed toward other parks projects. Since implementation, the tax has raised more than $3,889,342 in revenue, funding the grandstands construction and a forthcoming replacement of the field turf.

Sandpoint isn’t the only resort city in danger of losing the revenue mechanism. Hailey, Idaho, is another city creeping toward the population cap, measured at 7,960 in 2010 and estimated at 8,282 in 2017. According to Hailey City Administrator Heather Dawson, the city’s officials aren’t worried about crossing the line by the 2020 census. But they are keeping an eye on growth patterns over the coming years, because losing access to resort city taxes would be a debilitating blow.

“Our local option tax changed the way we are able to deliver services,” she said. “It made a huge difference in terms of quality of service to our community. It’s an important element.”

Stapleton is hopeful a legislative solution will prevent the city from the difficult funding decisions stemming from the loss of resort-city tax dollars. To that end, she’s in communication with District 1 legislators, who have been responsive to her concerns.

According to Sen. Jim Woodward and Rep. Sage Dixon, Sandpoint and Hailey officials have at least one reason to breath a sigh of relief. According to an Idaho Attorney General opinion, resort city taxes are legally permitted to run the course of their voter-approved lifespan even if the city grows past 10,000 people during that time. That means that Sandpoint would have access to its hotel tax until 2026.

“This opinion gives us a little more time to consider a path forward should the 2020 census reveal that our population has exceeded 10,000,” said Dixon.

While that gives the city some breathing room, it’s still not a permanent solution, and Dixon said that to date, no clear legislative solution has emerged. Nevertheless, the legislators have some conceptual ideas they’re eager to develop.

“We’re still actively working on a legislative fix to allow Sandpoint to remain a ‘resort city’ per Idaho code,” said Woodward. “We have a draft bill that I put together with a little help. Rep. Dixon is working with his House colleagues to clear a path for it. I think I can get it through the Senate.”