Sandpoint Mayor Shelby Rognstad is no stranger to hate mail — or hateful robocalls, for that matter. Even before he won election in 2015, Rognstad was made the subject of racist, sexist and homophobic slurs spread by an anonymous group that called itself Sandpoint United Against Shelby. Though the origins of the anti-Rognstad calls were never uncovered, former Sandpoint resident and avowed racist Scott D. Rhodes was subsequently linked via his vlog “Road to Power” to similar robocalls and other forms of harassment aimed at a wide range of targets — from U.S. Sen. Dianne Feinstein to the leaders of the Spokane Transit Authority workers union and a number of other individuals between. In 2018, a rash of anonymous, threatening robocalls also targeted Sandpoint Reader Publisher Ben Olson. 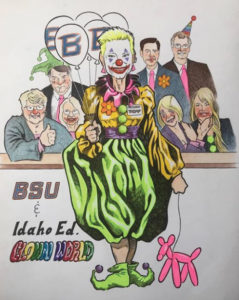 An illustrated postcard that was mailed to several lawmakers depicts Boise State President Marlene Tromp and the Idaho State Board of Education as clowns. Courtesy image.

Though Rhodes left town in 2018 amid scrutiny from local law enforcement over his alleged activities, his message to fellow racists to “relocate to North Idaho, where very white is very right,” touched a raw nerve in a region that has battled against its reputation as a haven for neo-Nazis, anti-government extremists and other varieties of right-wing radicals for the better part of 30 years.

“The historical reputation that our community has as being one that harbors white nationalism and racism — I think that that’s a real significant concern for us; not just because our own quality of life and our own sense of safety within our community, but it has a direct impact on our economy. It’s bad for tourism,” Rognstad told attendees at his monthly Mayor’s Roundtable on July 19.

“That’s the reputation we have out there in the larger world and we’ve been in the national media going back to the ’80s with the Hayden [Aryan Nations] compound, and it’s been popping up since the Scott Rhodes thing,” he added. “It’s terrified people in our community.”

Rognstad used his most recent Mayor’s Roundtable as an opportunity to talk about what he described as a constructive way to push back against racism, discrimination and intolerance in Sandpoint — what he calls the “Social Equity and Inclusion Initiative.”

The first phase, which would be paid for with $8,000 requested by the mayor in the city’s 2020 budget, focuses on an internal audit of city policies and practices to assess whether or not it is offering equitable access, involvement and services to people from a range of racial, ethnic, gender, sex, social and economic backgrounds.

“For instance, are our parks equitable? … Are they meeting the needs of everybody versus leaving some people out?” Rognstad said. “Also when we’re looking at hiring practices — do we have the right safeguards to ensure that we have a safe working environment that is empowering to everybody and isn’t exclusive without us being aware of it?”

Rognstad envisions broadening the scope of the initiative to bring in local businesses and nonprofits, which would similarly engage in a process of soul-searching to see where and how they might make changes to further the stated goals of social equity and inclusion.

“We’re at the beginning stages here, so it’s really just charting the course of that’s where we want to get to, and I’m not sure of what the road looks like between here and there,” he said, later summing up the initiative as an effort to “change our identity from the inside out so that we can reestablish ourselves as the community that we want to be seen as, which is one that is welcoming, helping, loving, kind, inclusive.”

Rognstad’s push for an inclusion initiative comes as a similar measure at Boise State University has roiled partisan waters in the capital. When interim Boise State President Martin Schimpf announced a slate of policies geared toward broadening diversity services, programs and protections, it was met with condemnation by a number of Idaho Republican House members.

District 1 Republican Reps. Heather Scott and Sage Dixon were among the 28 legislators who signed a July 9 letter to incoming Boise State President Marlene Tromp calling on her “to consider a different path” away from diversity and inclusion efforts they deemed out of step with “the Idaho way.”

“This drive to create a diversified and inclusive culture becomes divisive and exclusionary because it separates and segregates students,” stated the letter, which was prepared by Idaho Falls Republican Rep. Barbara Dee Ehardt.

The hubbub over Boise State’s inclusion policies has since drawn responses from a number of state Democratic leaders and prompted a rally at the Statehouse in favor of the university’s strengthened diversity measures. Fuel was added to the uproar on July 22, when postcards depicting Tromp and members of the State Board of Education as clowns were mailed to several lawmakers.

Dixon, in an email to the Reader, prefaced his comments with the assurance that “I believe that everyone deserves to be treated with respect, no exceptions.”

However, he added, “The problem I have with these policies is that they are more divisive than inclusive. They separate out groups of people and grant them special status, which causes more segregation, as opposed to unification. Oftentimes these policies allow groups or individuals to use the power of government against those who they don’t agree with, and they inherently point to other groups as not acceptable, which can perpetuate the problem the policies purport to solve.”

Scott did not respond to a request for comment.

Boise Democratic Sen. Maryanne Jordan, who served on the Boise City Council for 15 years before her appointment to the Legislature in 2015, pushed back against the notion that inclusion initiatives are a misuse of government power.

“I think it is the business of government because government is always looking at the service it delivers and how it can best deliver it to its citizens,” she told the Reader. “It’s not an a la carte menu; the services the government delivers benefit some, while others benefit from others. At the end of the day, the services will benefit the community as a whole.”

Jordan added that “it’s incumbent on the elected officials of Idaho to stand up and speak out” against issues of discrimination amid a nationwide reported increase in hate groups since the 2016 election. “It’s not [just] a perception,” she said of Idaho’s reputation as a safe space for racists.

“As I travel the U.S. and abroad, I do not get the impression that we are perceived as a haven for racists or white nationalists,” he wrote. “Most people mention the natural beauty of North Idaho, and then state their appreciation for our political climate. While there have been anomalies in the past few years that were directed at the mayor in particular, they have not generated any noticeable following and have, for the most part, been appropriately reviled.”

What’s more, he added, “Sandpoint is known to generally follow progressive policies, and has already enacted protections for certain classes of people. That being said, if the mayor and City Council think an investigation into the city’s operations is warranted, that is their decision to make.”

Rognstad said that while he respects Scott and Dixon as politicians and seeks out issues to work on in common, “I imagine this is probably one of those areas where we disagree and that happens — that’s politics.”

Bonner County Human Rights Task Force President Brenda Hammond wrote in an email to the Reader that her organization has communicated with Rognstad about the proposed inclusion initiative and wholeheartedly supports it — especially amid the backlash directed toward similar efforts at Boise State.

“There can be no question of the need and appropriateness of a Social Equity and Inclusion Initiative in the light of the letter that was made public last week from 28 Republican legislators to Boise State University,” Hammond wrote. “We are delighted that our mayor has the courage to take a stand at a time when discrimination, injustice and inequality are being promoted not only in our state, but in our nation by our own elected officials.”

Meanwhile, Rognstad has no illusions about the possible blowback to his proposed initiative.

“I’m aware I’m kicking the hornet’s nest here, but I’m coming at this as a way that brings us together around common values,” he said.