The return of David Lynch and ‘Twin Peaks’

Early in the first episode of “Twin Peaks: The Return,” a vehicle rumbles down a dusty backroad. Car headlights do little to ward off the oppressive night. Rock music, slowed to a demonic warble, plays on the soundtrack. When the car parks, it is actor Kyle MacLachlan who steps out, but he is a far cry from the good-hearted character, FBI Special Agent Dale Cooper, he played in the original show. This is an altogether darker figure, a creature native to the altogether darker “Twin Peaks” it inhabits. 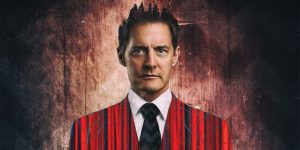 Co-writer and director David Lynch is back from a decade-long hiatus to helm the 18-hour “Twin Peaks: The Return,” a project that brings with it the thematic obsessions and stylistic sensibilities he developed over his film career. Like those headlights bobbing in an ocean of black, Lynch’s vision is one of human decency struggling against a far more potent malevolence.

For those unfamiliar with Lynch’s career beyond the aggressively quirky first two seasons of “Twin Peaks,” the new series’ first four episodes will feel altogether foreign. They are replete with deep dives into Lynch’s signature surrealism, a style vastly magnified from its role in the original run. On the other hand, Lynch devotees will be delighted. There are elements of his entire career, from “Eraserhead” to “Inland Empire,” embedded in the first four episodes, and piecing together that twisted puzzle may well prove one of the series’ greatest pleasures.

For all its unrepentant weirdness, “Twin Peaks: The Return” is still a conventional sequel to the original series, no doubt thanks to series co-writer and co-creator Mark Frost. Picking up 25 years in the future, the evil spirit Bob roams the country as a doppelganger of FBI agent Dale Cooper, bringing death and havoc wherever he goes. Cooper, meanwhile, remains trapped in the extra-dimensional Black Lodge, the iconic, red-draped setting of “Twin Peaks’” most surreal moments. As the first few episodes re-establish the 25-years-older and not-necessarily-wiser characters, they also introduce a far more unsettling string of gruesome deaths taking place across the nation. Those deaths may well plant the seeds for the unifying narrative that drives the 18-episode plot forward.

And yes, there is a coherent plot to be found in the first four episodes of “The Return,” at least when compared to Lynch’s more abstract and inscrutable films like “Inland Empire.” For long-time fans of the show, there’s also a real pleasure in becoming reacquainted with the returning characters. The Horne brothers are still preoccupied with their increasingly eccentric business interests. Sheriff Deputy Tommy “Hawk” Hill remains level-headed and dependable, his investigations and tips from the Log Lady linking the Twin Peaks township to the over-arching plot. And sheriff’s office employees Lucy and Andy Brennen are as hilarious as ever—their scene with their son Wally will either leave viewers in stitches or completely baffled. As for Kyle MacLachlan, he is alternately the first four episodes’ most menacing and funny presence due to his multiple roles.

The returning characters provide a welcome dose of humor for what is, on the whole, a much darker show. Taking advantage of Showtime’s minimal content restrictions, it is at times shockingly violent and frequently very scary. An early scene involving a New York City college student tasked with watching a mysterious glass box is a stand-out, setting up a mystery that culminates in one of the most unsettling moments of television horror I’ve seen. It’s a scene that sends a single message in the sharpest, clearest language possible: Lynch hasn’t lost a single step in his 10-year absence.

It’s safe to say “Twin Peaks: The Return” isn’t for everyone. Not only is it best to have already seen the first two seasons of “Twin Peaks” and its prequel movie, “Fire Walk With Me,” it’s also helpful to be familiar with the cinematic vocabulary Lynch has built throughout his film career. This is a series that asks you to hang with it when it introduces a tree crowned by a fleshy, talking sack, or a character’s head suddenly evaporates into smoke, or a man vomits up a revolting blob and is then replaced across dimensions by an entirely different person. It’s also the most fearless, experimental and visionary show on TV right now, and given the excellent field of competition, that’s saying something.

Welcome back, David Lynch. You’ve been gone for too long.