Editor’s Note: Scott Rulander finished the CHAFE 150 Gran Fondo at the head of the pack, tying with Scott Starbuck for first place with a finishing time of 7 hours, 24 minutes, 14 seconds. The two winners averaged 20.26 mph for 150 miles. Our contributor, Jodi Rawson, caught up with Scott and asked him a few questions about his experience with this annual event which has raised over $210,000 for the Lake Pend Oreille School District, which is directed toward the special education department to benefit children on the autism spectrum and those who have emotional needs. 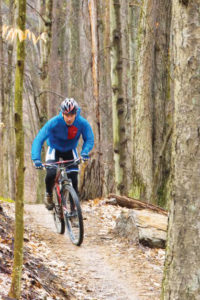 1. What was your training schedule leading up to CHAFE?

I’m pretty flexible with my training. I started riding this year at the end of March and by mid-April I was riding between 100-200 miles a week. Most of my miles are on my road bike, especially early season, but I also like to ride my mountain bike.

2. What foods do you rely on for strength and energy?

For long rides like CHAFE, I have been using a product called Tailwind. I just dump my white powder into a water bottle and it magically provides electrolytes and about 250 calories in each bottle. I also have some really expensive gummy bears that I snack on. I stopped at two of the aid stations on the CHAFE and just needed to fill water bottles. I did eat an oreo cookie, and at mile 70, I reached in my jersey and was stoked to find a banana. I had forgotten to eat it at the start.

3. What was your strategy for doing well in the ride?

I went into the ride knowing that if I ended up alone, it was going to be a long day. I had been training with my buddy, Justin Henney, and on a training ride just two weeks prior to CHAFE he and a Hummer collided which left Justin pretty banged up.

He miraculously healed up in time for CHAFE and we had an agreement to stay together and take turns pulling into the wind. It can be up to 30-percent less effort to draft behind a fellow rider. From Sandpoint to Bonners Ferry we were part of a leading pack of about 20 riders and it was smooth and fast like a well oiled machine. When we pulled into Bonners, nearly all of the riders stopped at the first aid station, but Justin, myself, and two other riders (Scott and Jamie) continued with a plan to stop near Yaak River. We became fast friends for the 20 miles between Bonners and Yaak working together well as a team of four, but at mile 55 when Justin and I pulled in for water, our new friends continued on and we would spend the next 50 miles chasing to slowly pull the group back together. At around mile 100 we were back together and all tired enough to commit to working together to the finish. Those last 30 miles seem painful no matter how well you’ve trained, and Justin was battling extra aches and pains from his crash, and as we turned onto the bypass in Sandpoint, Scott from Spokane attacked and began a sprint for the finish. With some help from two 80-mile CHAFE riders, I was able to come along his side, and we rode to the finish side-by-side and were given the same time resulting in a tie. Justin and Jamie came in a couple of minutes behind us.

4. What are your other passions?

I am a videographer and editor, and five years ago, I started a small Sandpoint-based video production company called Gem Vision Productions. I like working with local non-profits to help tell their stories through short documentary style films. In the past couple of years, I have been documenting the restoration of the Clark Fork Delta, traveling to Ethiopia to document the building of an orphan village and helping with many other great projects in our local area. I love to spend time in the mountains whether it’s mountain biking or backcountry skiing. To be honest I sometimes question my passion for road biking, but I think it’s the incredible efficiency of the bike and the kind of runner’s high that I get from it.

5. What are your future cycling goals or dreams?

I would like to ride from Sandpoint to the Washington coast on the North Cascades Highway in less than 24 hours. I have also been scoping out a route to mountain bike from near the Canadian Border to Clark Fork following high country trails through the Purcell and Cabinet Mountains. I’d also like to learn to do a wheelie, but that’s probably a bit ambitious.

I have lived in Sandpoint for 15 years.