Medicaid expansion is a debate Idaho has grappled with since the introduction of the Affordable Care Act in 2010. Now the state has a chance to settle that debate once and for all with a vote on Proposition 2. 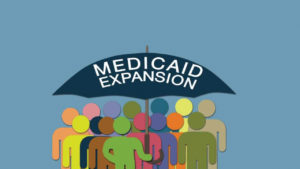 With the executive and legislative branches of the state government controlled by the Republican party, proponents of Medicaid expansion in Idaho failed to find a political path forward. This year’s referendum is a chance for supporters to bypass the politicians through the will of the people, establishing a solution for the estimated 78,000 people who make too much money to qualify for Medicaid but too little to purchase subsidized insurance plans through the health care marketplace. But with an electorate as red as Idaho’s, does the proposition stand any chance of passing?

Emily Strizich of Reclaim Idaho, an activist group supporting the passage of Proposition 2, thinks so. She sees Medicaid expansion as a solution not just for people caught in the health care gap but also for fiscal conservatives seeking to rein in expenses.

“When I think of classically Republican ideals, I think of fiscal conservatism, and we know that Medicaid expansion will save $15 million a year,” she said.

A state-ordered study this summer confirmed that assessment, finding that Medicaid expansion would save the state a minimum of $10 million in the first six months and up to $635 million over 10 years. That’s set against a projected cost of $529.6 million to expand Medicaid over 10 years. The cost to the federal government would be $4.7 billion. The savings, according to the Spokesman-Review, comes from reduced operational costs to several state and local programs, including Idaho’s Catastrophic Health Care fund, local indigency programs, Substance Use Disorder Services, Idaho Department of Health and Welfare’s behavioral health services and mental health.

According to Strizich, the fiscal angle has brought many Republicans out in support of Medicaid expansion. Similarly, organizations like the Idaho Sheriff’s Association endorsed the plan for its potential to reduce drug abuse and criminal recidivism.

“Sheriffs voted overwhelmingly to support Proposition 2 to save taxpayers money, to keep people out of the jails, and to keep people out of the emergency room,” said Chris Goetz, Clearwater County sheriff and government affairs chair for the association. “By expanding coverage to low-income people with health issues or mental health issues, they’re more likely to contribute to society and less likely to end up back in the system.”

On the other hand, Idaho is a stronghold for libertarian conservatives ideologically opposed to the expansion of government. And perhaps no other organization in the state promotes those values more effectively than the Idaho Freedom Foundation, which is opposed to Proposition 2.

“Prop 2 would give immense power to federal politicians and bureaucrats over Idaho,” wrote IFF President Wayne Hoffman in an editorial. “Said federal power would very likely be in violation of the state constitution. Further, such power could prove damaging to myriad programs.”

Exactly which side the Idaho electorate will support in this ideological split is not easy to determine, and the available data can support an argument in either direction.

In an exhaustive look at the polling surrounding Proposition 2, data analysis website FiveThirtyEight concluded that voter opinion had much to do with the wording of the question. According to a Boise State University poll last year, a survey of 1,000 residents found that three-quarters of respondents “favored the governor and state legislature taking action to provide them with access to quality health care.” The word “Medicaid” was not used in the poll.

Idahoans were similarly supportive in a 2015 Dan Jones and Associates poll of registered voters, which asked, “Do you support or oppose an expansion of federal Medicaid coverage in Idaho?” Sixty-one percent said they supported it. The next year, 64 percent of voters and 49 percent of Republicans said they disagreed with the Idaho Legislature’s decision to not expand Medicaid.

On the other hand, an Idaho Freedom Foundation poll noting that Medicaid expansion would largely cover “working-age, nondisabled, mostly childless adults” yielded only 39 percent in support of Medicaid expansion.

Regardless of which direction the polls point, Strizich believes that the momentum is pointing toward Proposition 2 succeeding. The task for Reclaim Idaho, she said, is to keep that momentum flowing until the day of the election. That means phone banking, canvassing and mobilizing volunteers to maintain their conversations with everyday Idahoans. For the next month, the organization’s signature green buses — which has now expanded to a fleet of two — will spend their share of time on the road.

“We need to keep our foot on the gas pedal between now and the election,” Strizich said.