Profile on Autism: The Barth Family

For Lisa and David Barth, autism officially entered their lives 15 years ago. Their son, Jackson, was diagnosed at two years old. Since the diagnosis, the Barths have made it their mission to understand as much about autism as possible, both as a tool for teaching and relating to their son, as well as to aid the community in understand the fastest growing developmental disability.

Lisa and David said that once the diagnosis confirmed that Jackson was on the autism spectrum, they felt a mixture of relief, grief and conviction. 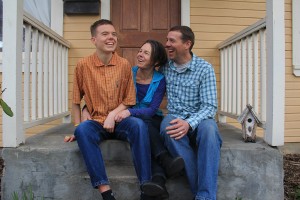 The Barth family, from left to right: Jackson, Lisa and David. Photo by Ben Olson.

“With a diagnosis comes mixed emotions,” said Lisa. “What it does in a very general way is provide a framework for which parents—as well as medical, educational and developmental specialists—can all begin from.”

“It defines the ballpark that you’re playing in,” explained David.

David said they knew something was different about Jackson from an early age.

“We had actually gone to a pediatrician and said the word autism, and initially that pediatrician said ‘I don’t think so,’” he said. “Once we did get the diagnosis … now we knew what it was, and we said, ‘Let’s explore that and grow and learn.’ Ever since, we’ve been marching along.”

Jackson Barth is much like any other 17 year old teenager. He attends 10th grade at Sandpoint High School, where his favorite teacher is Miss Kristin. He likes to hang out with friends and enjoys cooking burritos.

Jackson started at Washington Elementary School with his peers in the general education classroom, but switched to life skills classes in Sandpoint Middle and High Schools.

According to Lisa, it’s always beneficial for students with special needs to be in classrooms with their peers as long as they are capable of participation in the curriculum.

“That’s the whole philosophy,” she said.

“In first and second grade, he was more closely aligned with his peers,” said David. “In fifth and sixth grade, it was less so, and it’s been more and more divergent since.”

Both Lisa and David have noticed that autism awareness has increased dramatically in recent years.

“I think the reason [autism awareness] has gotten so big is that it touches everybody,” said David. “It doesn’t care about ethnicity, race, religion, age, or socio-economic status.”

David also said that we’ve gotten better at early diagnosis and knowing what the disorder is, although there are still mysteries that remain unexplained.

“He’s very connected to us and to many people,” said David. “You can ask him questions and he’ll give you responses. Spending time with him, you can watch him light up or get agitated or frustrated with various things. We’ve seen this for 17 years, so we’re highly attuned to what those things are, but at the same time, when someone asks, ‘Why does he do that?’ my initial response was ‘Don’t you think if I knew, we would have figured out by now?’ We just go with it. It’s been a huge lesson in acceptance, surrender and pleasure. We may as well enjoy it, and we do.”

As part of their commitment to understanding autism and spreading awareness to the community, both David serves on the board for the local nonprofit organization Team Autism 24/7, whose mission is to create community, to educate and to promote awareness and understanding of autism and its challenges and gifts. Lisa volunteers for the organization as a coordinator of programs and events.

“Team Autism does a lot of summer programs and training,” said Lisa. “We’re doing training with and for families and professionals.”

One area of training has to do with the understanding that some on the autistic spectrum prefer visual learning, as opposed to auditory or verbal learning.

“We do a lot of visual learning,” said David. “It’s the most concrete. We have a computer program that can have picture icons and words to schedule what happens next … If that’s in place, it’s easier and better for Jackson. I can really tell if we’re just running with a lot of auditory or verbal stuff. He can get it, but he can get full. Jackson has been the one who has taught us what he needs.”

For Jackson, life exists on a schedule. If the schedule is reinforced by visual pictures of what the action dictates, even better. An icon for “Brushing your teeth” will be accompanied by a picture of a toothbrush and a row of teeth.

Every Sunday evening, the Barth family gets together and makes up the schedule for the upcoming week. The schedule details every minute action. There was even an entry for my visit and interview.

To break from the schedule is never a good thing.

“For him, it’s very important,” said David. “You can imagine living in a world where you don’t really know what’s happening. The visual schedule is like a lifeline, an anchor. When it’s cut adrift, it’s really challenging and distressing.”

“No surprises,” said Lisa. “Jackson has a high need to know. He perseverates when we don’t have it scheduled.”

An example of perseveration would be in the 1988 film “Rain Man.” Dustin Hoffman plays an autistic man who is seemingly obsessed with watching Judge Wapner at 3 o’clock, and buying a pair of underwear from a specific K-Mart on Oak Street.

“If we’re going to the Library and we walk up and see it’s closed, we’ll say, ‘Oh, we’ll just go tomorrow,’” said David. “You and I can handle that. That’s a major challenge for Jackson.”

As a result, Lisa and David have managed to map out every week both for themselves as well as Jackson.

“We live by this schedule now,” said Lisa. “It’s actually really great for any family to use.”

Moving forward, the most difficult transition will likely take place when Jackson turns 18 this fall. For someone who requires adult supervision at all times, the question for the parents remains how to promote independence in their child while also guaranteeing he’ll receive the care he needs throughout the rest of his life.

“We’ll become his guardians when he turns 18,” said Lisa. “Then the issue is navigating Jackson’s ability to live with increased independence while finding fulfilling work.”

One thing is for sure, however, both Lisa and David feel nothing but love for their son.

“I’m the steward of an angel,” said Lisa.

We’ll continue this profile series on autism with another article in next week’s Reader.