We’re back. I hope you’re ready to learn, or at least laugh at some sci-fail silliness.

Faster-than-light travel is a big offender in just about every movie. For objects with mass to reach the speed of light, the amount of energy required becomes infinity. 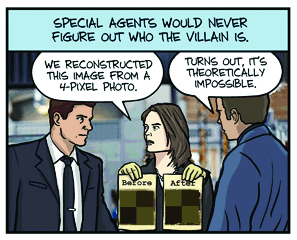 The offense in movies has more to do with time and plot than vehicles moving really fast.

Remember those annoying word problems about trains on the SAT? When you factor in time dilation, if you have the trains traveling at the speed of light, the passengers would experience an instantaneous trip until the trains began moving below the speed of light or collided. However, time would be unchanged for people outside of the vehicle.

Let’s say that “Cloud City” was four light years away from Dagobah. By the time that Luke left Dagobah, Han, Leia and Chewie had already been betrayed and were in trouble. Luke would jump into his X-wing and experience an instantaneous trip. But as soon as he slows down and enters Bespin’s atmosphere, he would come to find that Han Solo had already been frozen in carbonite for four years.

At least Luke would still have both of his hands!

Orson Scott Card is one of the few authors that has gotten time dilation and the effects of near-light-speed travel pretty darn close, and used it to mold his plots and pacing very well.

The conundrum of FTL travel is even further compounded by figuring out how you’re going to slow down to reach your destination without passing it or liquefying everyone inside the ship.

It would take the same amount of energy to slow down the ship in a vacuum as it would have taken to speed it up. This would take some very serious and precise calculations, because everything in space is moving at all times.

Then there’s the trope of “aliens” always looking like us. This one is impossible to disprove…to an extent. We haven’t found extraterrestrial life of any kind, yet. To be fair, with our technology, it’s like trying to use a telescope to see what the president is tweeting while you’re in Utah.

One thing we know for sure, even if alien life was at one time reminiscent of Earth’s primates, they definitely won’t have our body structure.

Our skeletons lose anywhere from one to two percent of their total mass for each month we are in microgravity. Why?

The primary purpose of our skeleton is to counteract gravity. When we’re not dealing with gravity, our bodies see that it’s made of resources that would probably be put to better use elsewhere.

It’s believed that you can counteract this by spinning your ship, using centrifugal force as a surrogate for gravity, but if you’re using the same amount of energy to do that as you would to make some awesome exoskeleton that is 10x cooler than your normal body, wouldn’t you take the exoskeleton? Think those cool loaders from the “Alien” movies. Do you even lift, bro? Yeah, like a forklift!

If alien life spent a significant time in microgravity, it would probably look more like a jelly blob than a tall, hunky human or a blue-skinned spacebabe, as sci-fi has taught us. Sorry, Captain Kirk!

Enhance it! This is an ironic trope of crime shows. The entire case is stalled; the group doesn’t have enough evidence. At least not until the handsome lead detective leans in and delivers a stern command to their quirky tech guy:”Enhance it!” Suddenly, the image on the screen gets all grainy, but sorts itself out better than before. Bingo, they have their criminal.

The irony of this is the show is being produced, filmed and edited by visual engineers that eat sleep and breathe cameras.

Digital cameras capture images as pixels, points of light that, by themselves, are just a single box of color, but grouped together in the hundreds of thousands create a discernible image. You can zoom into a digital image, you can make it bigger, but you’re just enlarging the pixels, not unearthing previously unseen detail. That’s why it looks fuzzy when you zoom, you’re just zooming in on colored boxes.

A detective using an “enhanced digital image” to prove something in court would be the equivalent of drawing a mustache on Charlie Chaplin and saying that you proved he started World War 2.

Now that I’ve made bitter enemies of North Idaho’s moviegoers, I’m gonna go crawl into a bag of popcorn and hide until next week.

Hey, your favorite movie might be scientifically implausible, but at least it’s still fun to watch things blow up.