It’s that time of year again! Raise your hands if you saw an adorable gosling at the feed store and just had to have it. 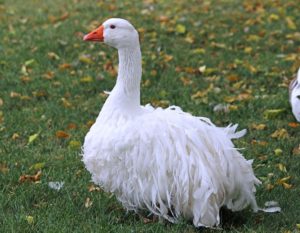 Fast forward a few weeks, you have a loud, obnoxious dinosaur that won’t fit anywhere but your tub.

Speaking from personal experience, I’ve got some news for you: They aren’t getting any smaller.

There are reasons we domesticated geese, and they can prove to be a useful pet and companion for decades to come. Oh yeah, buddy. You’re in it for the long haul.

Domesticated geese come in a number of varieties, from the Grey Toulouse to the White Chinese and the African. These are the most common you’ll see around here, but specialized breeders can sell you a Buff Goose, which gets its name from its buff color and not its killer biceps, or the Sebastopol, which looks like an accessory from a Katy Perry concert.

Before I go any further, if you got a goose and you’re living in town, you’re going to want to find it a good home somewhere else. Geese are NOT town pets. They’re loud, they’re protective and they live up to 30 years. If you don’t live in town and this is your first experience with geese, then this article is right up your alley!

Raising geese is a lot like raising ducks for the first few weeks. They’re loud, they’re filthy and they need a lot of water that they end up splashing all over everything. They might stink, but it’s very important to socialize with them during this time. Geese are a lot smarter than ducks, and they have rigid social interactions and hierarchies. If you don’t pick up on these cues early on, you won’t be a part of the flock, and you’ll likely end up on the wrong side of a goose’s bill.

Gently wrap your gosling up in a towel to keep it warm, and sit very still with it while you’re watching TV or something that doesn’t require a lot of movement. They’ll poop all over the towel and probably try and climb all over you, but it will help you bond. Be sure to bribe it with treats while you do this. Leafy greens work best, as their diet is mostly grass and other greens.

You may notice after a while whenever you approach your gosling, it will extend its neck and make noise at you. It almost appears to be bowing. This is a greeting, and they find it very rude if you don’t respond. Some people say you’re supposed to mimic their action, but I’ve found just repeating a familiar tone or phrase or offering treats is usually good enough.

Geese use a lot of body language to communicate, as well as verbal cues. The head bowing is a greeting. If you see a goose flap its wings and wiggle its butt, be a little cautious. This is dominant behavior. The goose is saying: “I’m the boss!” If you see it lower its head and keep it lowered, be very cautious. If this is accompanied by a hiss, your goose is mad.

Most geese have a reputation for being mean, but a more accurate descriptor is “protective.” They aren’t some overlord hellbent on wiping out half the universe with some shiny rocks — they’re just trying to protect themselves and their flock. If your goose shows signs of protective behavior, keep small children behind you. A goose bite sucks for an adult, but it can be traumatizing for a small child. This sort of behavior crops up during the spring, when the ganders (males) are protecting the hens (females) and their eggs or goslings. It’s normal behavior, but if you have other animals like ducks or chickens, you’ll want to do your best to house them separately during this phase.

If you bought a single goose a few weeks ago, consider purchasing one or two more. They’re very social animals, and keeping them without other waterfowl can cause the goose to become depressed, aggressive or develop OCD-like behavior such as nonstop preening to the point that they’re pulling their own feathers out. When purchasing goslings with an age gap of two weeks or more, keep them separated if in a small space, but able to see and interact with one another. In smaller spaces, older goslings may accidentally trample smaller ones. In larger brooders, this isn’t as much of an issue.

So what are the perks of owning geese? First and foremost, they make great guard dogs. If something is amiss on your property, you’re going to know about it right away. Their large size and protective nature make them a deterrent for smaller predators like martens and some raccoons. They also lay pretty big eggs, but even heavy producers only give about 50 per hen per year. Geese are mostly raised for meat, as a single bird can weigh up to 25 pounds at the time of slaughter. In my opinion, they’re also a load of fun to watch.

Most domestic geese are too heavy to fly, so they aren’t leaving in winter. That means they need adequate protection from the elements: Four walls, a roof, and most importantly: no drafts.

If you want more detailed information, stop by the library sometime. We have a lot of poultry books (Storey’s “Guide to Raising Poultry” is one of my favorites) that can help you out. I’m also pretty crafty myself, so if you have questions, you know where to find me.