When you think about famous scientists, a lot of names come to mind: Thomas Edison, Marie Curie, Albert Einstein — but what about African-American scientists? The first two names that likely popped into your head were George Washington Carver and Dr. Neil DeGrasse Tyson. 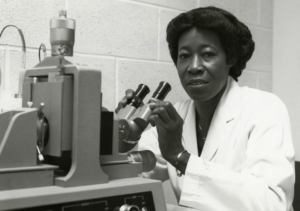 Tyson is the most charismatic astrophysicist you’ll ever meet, and has earned science superstar status by making awe-inspiring science accessible to non-experts — especially young people — around the world. He’s so good at inspiring others to contemplate the universe because he, too, was once a kid dazzled by the wonders of the stars.

Growing up in the Bronx, Tyson first encountered the wonders of astrophysics after a visit to the Hayden Planetarium in New York City — the very same planetarium he would one day serve as director.

Tyson has since popularized science in the public eye through a number of television projects and appearances, as well as podcasts, in a highly successful effort to attract interest in scientific fields and inspire the next generation of scientists — especially children of color.

Careers in science, technology, engineering and math (commonly called STEM) are already extremely difficult to enter, but these difficulties are compounded for people of color for myriad reasons, ranging from systemic poverty and domestic instability caused by disproportionate rates of incarceration for non-white communities, to structural racism and the effects it has on the opportunities available to young people.

The ways in which these factors throw up hurdles to education and career development go on and on, and extend far back in American history to well before Reconstruction or the Civil War — even back to the Revolutionary and Colonial periods. If you’d like to know more, you should turn off cable news and talk with a librarian to get the facts. It’s a vastly complicated and difficult subject to tackle, but the takeaway for this article is that African-American scientists are rare and their accomplishments have not been celebrated as widely as they should have been, considering the importance of their studies to humanity.

One of these accomplishments has saved innumerable lives in the operating room with the development of latex or the preservation of our food with a number of other polymers. Dr. Bettye Washington Greene was the first African-American woman to join the Dow Chemical Company in 1965, a century after the conclusion of the Civil War and in the wake of President Lyndon B. Johnson’s signing of the Civil Rights Act in 1964. After earning her Ph.D. in chemistry, Greene went on to help research the development of latex and a number of other polymers for the next two and a half decades.

Even though plastic polymers  — or, more accurately, their disposal — are a major threat to our planet now, their important role in propelling our civilization to its current level of technical advancement is undeniable.

Speaking of achievements, have you ever attributed not achieving more in life to a bad memory? Ernest Everett Just long ago dashed that excuse like it’s no big deal.

Born in South Carolina in 1883, Just attended a segregated school and worked as a miner to help support his family. Amid those struggles, he contracted typhoid, which erased his ability to read and write — both skills he had to relearn. While that would lead most of us to throw in the towel, Just went on to graduate with honors from Dartmouth College in New Hampshire.

His struggles didn’t stop with typhoid. After decades of work and study at Howard University, the University of Chicago and elsewhere in the U.S., Just increasingly based his research in Europe — specifically at institutions in Naples, Italy; Berlin; and Paris. Studying microbiology in France in 1939, Just declined to flee ahead of the Nazi invasion and was imprisoned in a POW camp, where he stayed until 1940 when his wife and the U.S. government secured his release. He died a year later from pancreatic cancer.

The final scientist in our brief review was an important figure for some of the world’s biggest movers and shakers — most notably, billionaires like Elon Musk and Jeff Bezos who have their eyes on the stars. Dr. Emmett Chappelle wasn’t just a prolific black scientist; he was the authority on the detection of extraterrestrial life and environmental management. Before you roll your eyes at the thought of little green men, his research was in microbiology: single-celled organisms like bacteria and algae.

One of the most incredible discoveries he ever made (and he made a lot of incredible discoveries) was discovering that individual plant cells were capable of photosynthesis — using light as an energy source by breaking apart carbon dioxide molecules into carbon and oxygen. While this seems like a real “duh” moment today, it’s thanks to his discovery that we now know how to utilize individual cells of algae to harvest and store energy for food, as well as a means for mechanical energy production.

Additionally, Chappelle’s studies illuminated how to foster (and eliminate) bacteria and algae in isolated areas like a greenhouse — or more, perhaps, a Martian habitat.

There were so many other incredible scientists I wanted to include, but I’ll just have to wait until next time. If I’ve learned anything from researching all of these people it’s that if you have a passion for something, pursue it. Anything is possible, even if it seems like the world is engineered to make you fail. Every bump in the road is there to make your legs stronger, more ready to climb the mountain at the end of the journey.

See you at the peak.