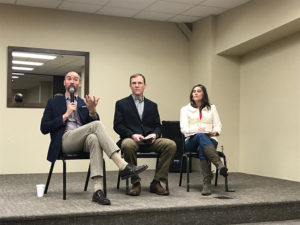 U.S. Congressman Russ Fulcher also attended the meeting, providing opening remarks about his experience in Washington, D.C. Then each state legislator shared their highlights of the 65th Idaho Legislative Session.

Sen. Jim Woodward, R-Sagle, said he learned a lot during his first session, and had the chance to work on an education funding bill that was ultimately passed in place of a completely new funding formula that’s been in the works for several years, but was ultimately determined not ready to be implemented.

Woodward said his first session led him to conclude that Idaho is in a good place, but that population growth will continue to be the state’s greatest challenge.

Rep. Heather Scott, R-Blanchard, noted that the legislature did not sign the annual “going home” bill for the first time ever. The bill, meant to enforce administrative rules from July to next July, must be signed before legislators go home from the session. The House wanted an amendment that would make it so both bodies would have to approve the rules before they’re considered law. Currently, only one body has to give the OK and the rules are deemed effective.

“What we did was on that going home bill, we added an amendment that basically said both chambers have to approve this executive branch rule before it has the full force of law,” Scott said. “(The Senate) sent back a clean bill … and we basically adjourned without passing the going home bill, which is huge. It’s unprecedented.”

For the question and answer portion of the meeting, attendees wrote questions on notecards which were then collected and read to the legislators.

When asked about the grocery tax, Woodward said they chose to hold off on considering grocery tax reform because income tax revenue was uncertain this year with all the recent withholding changes.

“But the stage is set for that discussion next year in the budget,” Woodward said.

One question brought up the child marriage bill killed in the House that would have raised the minimum age to get married in Idaho to 16 years old and required parental consent for those 16 and 17 to be wed. Both Dixon and Scott voted against the bill. Dixon told the Reader in March that while he agreed with the premise of the bill, he had “reservations about some of the language” and pointed out that Idaho “already (has) in statute the requirement for those 16 and under to gain both parental, and judicial, approval before a marriage license would be issued.”

“Who is the government to tell you when you can and cannot get married?” Scott said Tuesday. “That’s not a decision I think government should be making.”

One question addressed the possible “easing of marijuana laws” in Idaho. Dixon said if marijuana is legalized, it will likely be through the ballot initiative process. There is currently a petition for a ballot initiative to legalize medical marijuana submitted to the Idaho Secretary of State’s Office for review.

As for the Legislature, Scott said any kind of weed legalization is unlikely.

“We’re not even going to legalize industrial hemp, so I think we’re a ways off,” she said in reference to a hemp bill stalled during the session. “We can worry all day long, but I don’t see that happening in this state.”

When asked what motivated him to bring back, in four parts, the vetoed bill that would have made it harder to quality a state ballot initiative, Dixon said it was because Gov. Brad Little had an issue with the original bill “taken as a whole.” Dixon wanted the chance for the House, Senate and governor to choose what parts of the proposed law they wanted enforced. Though one of those four bills made it out of the House, the Senate didn’t hear it before the end of the session, meaning the ballot initiative issue is dead until next year.