There are questions we will never know the answers to: Why is there suffering in the world, why does Hawaii have interstate highways, and what would chairs look like if our legs bent the other way? Just as puzzling is Junoon’s apparent lack of fame here in the United States. 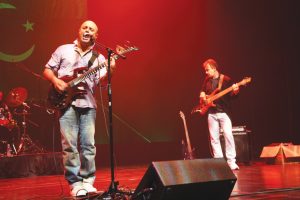 After all, we’re talking about a band that sold over 30 million records, played at the Nobel Peace Prize ceremony, has been called “the U2 of Pakistan”, and wowed fans all over the globe. Their music has a strong moral conscience and they’ve played countless benefits for charities and relevant causes. Just as importantly, their music picks you up and takes you for an enjoyable musical ride on a magical carpet across Asia.

As fate would have it, the band had its foundations rooted in America. The founder, lead guitarist, and songwriter for the band, Salman Ahmed, moved from Lahore to New York when he was 11. At age 13, he was feeling the awkwardness of being nerdy, unpopular and Pakistani when a classmate insisted he buy an extra ticket he had to a concert that would change his life. [The friend would later play guitar for the heavy metal band Anthrax.] Salman had to lie to his mother just to go, and he knew nothing of the words he read on the jumbotron: Led Zeppelin. But when those lasers hit Jimmy Page, adorned with the dragon pants and double-necked guitar, his life was indeed changed.

Ahmed worked as a busboy to save the $237 for a Les Paul copy guitar, locked himself in his room to play, worried his mother and later formed a band—almost the stereotypical birth of a rock star. I say almost because there were obstacles that many musicians will hopefully never encounter. The least of which was his mother’s obsession with Salman becoming a doctor. In fact after he graduated from high school in 1981, they moved back to Pakistan where his parents knew there were no rock bands. Salman would change that. But he also did become a doctor—placing him among the most over-educated of international rock stars.

More daunting were the death threats. During a Taliban raid on a talent show he was playing at, a rebel smashed his guitar, looked him in the eye, and said, “If you ever play this thing again I will shoot you down.” Ahmed would certainly not be blamed if he left music altogether—he was on his way to becoming a doctor and was being threatened by guys with machine guns. [Since 2008, 13 musicians, singers, and artists have been murdered in Pakistan.]

“I had to cave into the fear and give up my passion, or follow my heart,” Ahmed reported. “I chose to follow my heart ever since terrorists hijacked Islam and twisted so many things…suicide in the Koran is prohibited but they kill innocents, and the dreaded J-word, jihad, which actually means to lift yourself up and to lift up society, now conjures up the images of violence and extremism.”

Luckily for the rest of the world, Ahmed waged what he called “a rock ‘n’ roll jihad” and continued to play in clandestine bands around Lahore. In 1990 he left what was then the most successful band in Pakistani history—Vital Signs—to found one of the most successful bands in Asia—Junoon—along with Ali Azmat and Brian O’Connell.

The band continued Ahmad’s brand of “Sufi Rock”, often using lyrics from the Sufi poets themselves and including traditional instruments like the tabla. They spread their message of peace and the dangers of extremism, even to the point of being banned in their home country. They played to thousands in Kashmir despite the death threats and the fact that Pakistan and India have fought three wars over the region.  After 9/11, Junoon deliberately launched a tour of the U.S. They were the first rock band ever invited to play at the United Nations.

It’s easy to ponder why Junoon isn’t a household name, but it’s just as easy to find some of their music, turn it on, and bliss out. Preferably not while driving—you may need to jump up and down.

Authors note: much of this was admittedly borrowed from Salman Ahmad’s The Moth podcast. For more information, check out the podcast or his autobiography, “Rock & Roll Jihad.”