There are approximately 4,600 more whitebark pine seeds in the ground on Scotchman Peak thanks to a partnership between the Idaho Panhandle National Forests (IPNF) and Friends of Scotchman Peaks Wilderness (FSPW). Over the course of two backcountry deployments, three IPNF personnel and five FSPW volunteers sowed the seeds over about a 30-acre area that burned in the 2015 fire. 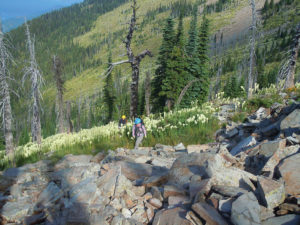 Crew members on the July whitebark pine deployment walking among the beargrass. Photo by John Harbuck.

The work with the whitebark pine trees started as surveys in 2013 and has evolved with IPNF botanist Jennifer Costich-Thompson leading the program. “Jennifer’s passion for the whitebark pine is the reason this project has been successful,” expressed FSPW Executive Director, Phil Hough. “The Friends are excited to be part of the restoration work for this important species.”

After the 2015 fire that burned a large portion of Scotchman Peak, the whitebark pine trees that were touched by the fire were left vulnerable to mountain pine beetle. In 2016, FSPW volunteers, with training from Costich-Thompson, spent a long day identifying and treating trees with a substance called verbenone. The trees were treated with this synthetic material that tricks mountain pine beetles into thinking they already attacked the tree.

The next step after giving the existing trees a better chance was to plant some more trees! In two separate NFF-funded deployments, IPNF staff and FSPW volunteers spent over 550 combined hours on Scotchman Peak to sow the two pounds of whitebark pine seeds. For the first deployment, FSPW’s portion of the crew had an average age of over 60. This group of energetic, hard-working and passionate retirees proved that age doesn’t mean a thing.

“I am grateful to all who have helped and hopefully will continue to help to restore this iconic species across the landscape and ensure that it exists for current and future generations to enjoy,” stated IPNF Sandpoint District Ranger, Erick Walker.

The whitebark pine is considered a keystone species in their unique high elevation ecosystem and is currently a “Candidate Species” under the Endangered Species Act by the U.S. Fish and Wildlife Service.