Among the oldest communal celebrations occur during the winter months, when people are huddled together inside for warmth. The crops have all been harvested and put away, the wood has been split and stacked, and there’s hardly enough daylight to do anything productive outside anyway.

So it’s no surprise that this part of the year has for millennia been marked out for communal feasting — and that has long included great quantities of extravagant libations, frequently shared in vast punch bowls and served by the ladle-full.

In that spirit, so to speak, here are a couple of time-honored tipples with which to toast your holidays, harkening to long traditions that may become part of yours. Regardless, happy holidays and cheers! 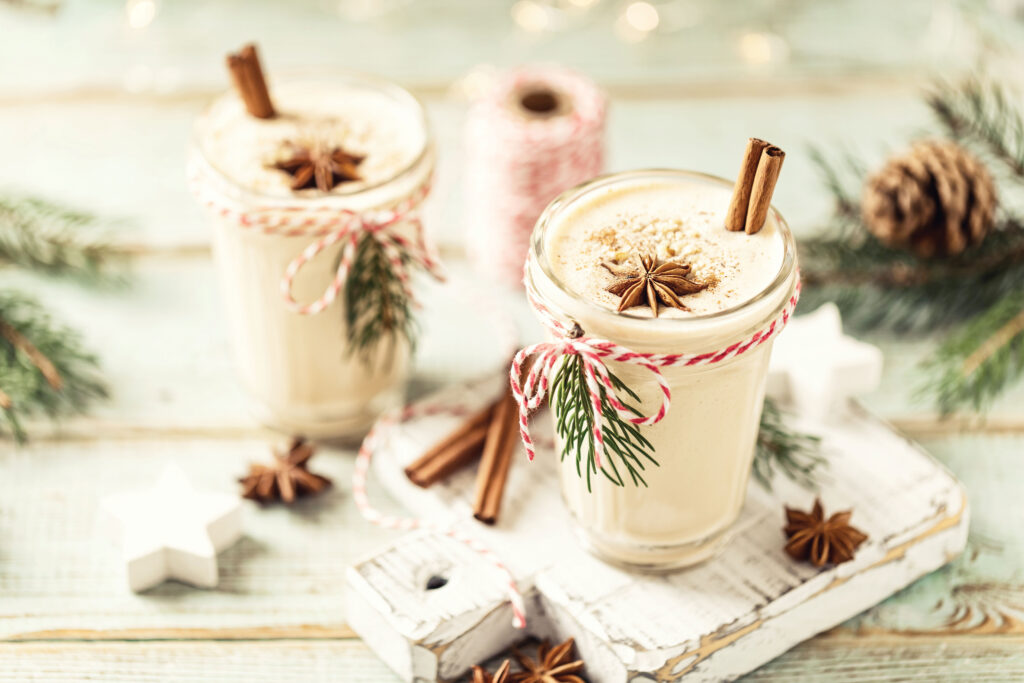 Thanks to the old song, we’ve all heard of wassail (the noun) and wassailing (the verb), and most of us are probably even aware that it refers to an alcoholic beverage to be consumed while wandering around and loudly toasting your neighbors. However, it may be surprising just how old this tradition really is.

According to most sources, the term “wassail” comes from the pre-Christian Anglo-Saxons (circa 1,600 years ago), who gathered with their lords to ring in the new year with mighty toasts of waes hael (“good health”), taken from the even older Norse phrase ves heill.

Of course, back then this holiday took place on Jan. 17 by the Julian calendar — otherwise known as Twelfth Night or “Old Twelvey.” When Britain adopted the current Gregorian calendar in the 1750s, Twelfth Night moved to Jan. 6 and, by the Victorian Era, wassailing had turned into an activity for poor people to literally sing for their supper, rather than beg in the streets.

The tradition grew to include the Christmas holiday in December and started being referred to as carolling.

Though the recipes varied widely through the ages — and depending on the financial means of the wassailers — the presence of apples seems to have remained constant for centuries, as the original practice was to thank the orchards for their produce and secure future harvests.

This recipe comes from almanac.com and (because wassail is meant to be consumed by a group) serves eight to 12 drinkers. Reduce as needed.

• 2 quarts of strong beer or ale (a bock is recommended)

Preheat the oven to 400° Fahrenheit. Peel, core and cut the apples into thick slices. Layer the slices in a deep dish, making sure to sprinkle sugar on each layer. Cover and bake for 30 minutes.

Heat the beer, spices, lemon zest and leftover sugar slowly in a large saucepan, bringing it to a simmer — do not let it boil. Once hot, pour in the sherry or other sweet red wine and bring it back to a simmer — still not a boil.

Remove the baked apples from the oven (they should be soft and puffy), place them in a large punch bowl and pour the now completed wassail over them.

Some sources will replace the beer with alcoholic cider and/or substitute rum or brandy for the wine.

Despite their reputation for quiet piety, Medieval monks spent a considerable amount of their time writing about, preparing and consuming alcoholic drinks. Among them was “posset,” which some sources date to the 1200s and consisting of warm ale, whipped eggs and figs. At the same time, milk and wine punches were also popular, and (about 400 years later) records indicate that sherry had replaced ale as the base booze.

Fast forward to the American colonial era, when cheap slave-produced Caribbean rum made for a readily available alternative to high-end wines or brandies, and you start to see the contours of our contemporary holiday ’nog.

(The name, by the way, may trace to the Old English word nog, meaning “strong beer,” or perhaps Americans combined the phrase “egg-and-grog” into “eggnog,” as it first appeared in print in the late 1700s.)

Eggnog or other drinks like it are not unique to the English-speaking world. Jewish communities in Poland drink something similar called “kogel mogel”; in Puerto Rico they add coconut juice; in Mexico it’s “rompope,” with cinnamon and vanilla; and in Peru they use pisco, which is the national brandy.

This is how no less than Martha Stewart suggests you mix your own “original eggnog” (albeit for a group of 26 — we strongly suggest halving or even quartering this recipe):

Beat the egg yolks until they’re thick, gradually adding sugar. Beat in the milk and 1 quart of cream with a whisk, then add the booze. Make sure to stir constantly.

Immediately prior to serving, beat the egg whites until they’re stiff, then fold into the mixture. Whip the leftover ½ cup of cream until it’s stiff, then fold it in, too. Sprinkle the nutmeg on top and serve in a large punchbowl.

Fun fact: This is pretty close to George Washington’s preferred recipe, though he also threw in a quarter pint of sherry. And we wonder why his teeth fell out.

Anyone who’s seen It’s a Wonderful Life more than a few times remembers guardian angel Clarence’s peculiar drink order: “a flaming rum punch.” The bartender looks at him like he’s a lunatic, and roughly suggests he order a “hard drink” and stop trying to provide “atmosphere” to the joint.

Little did that barkeep understand, a flaming rum punch is anything but “soft.”

The kind of punch familiar to Clarence during his mortal life in the mid-1800s would likely have been a heady mixture of wine, rum, spices and fruit with enough alcohol content to ignite when exposed to open flame.

There are many recipes for various flaming rum punches, but among the most interesting — and fun to say — is feuerzangenbowle, literally “fire tongs punch,” which is a staple of traditional German Christmas celebrations.

A relative of glühwein — which is itself descended from Roman conditum paradoxum (“surprise spiced wine”) — feuerzangenbowle takes mulled wine to another level, and has been a feature of German culture at least to the 18th century (and even featured in plays and films into the 1940s).

Here’s how to feuer it up, according to germanfoods.org (serves about 10):

Wash and dry the oranges and lemons, then cut them into wedges. Combine in a large pot with the wine, cinnamon, cloves and ginger.

Heat the mixture slowly — never bringing to a boil. Once simmering and giving off steam, transfer to a low-heat source like a fondue set or small burner.

Place a long slotted metal spoon or pair of metal tongs (the eponymous feuerzange) across the top of the pot. Place the sugar loaf or cone onto the spoon or tongs and saturate it with rum.

Once soaked through, light the sugar on fire and let it begin melting and dripping into the wine mixture. As it reduces in size, and the flames die down, slowly add small amounts of rum until all the sugar is burned off.

Stir gently and serve in any receptacle that’s not going to burn your hands.

If you end up loving this and want to make it every holiday season, consider investing in a specially designed feuerzangenbowle set, which consists of a metal pot and burner, tongs and glasses. You can find these in high-end kitchen stores and from a variety of online retailers.