The Brown House – the former home of Jim and Jean Brown, who once owned Schweitzer Mountain Resort and substantial land holdings in Bonner County – was demolished Wednesday morning.

Located just north of Bonner General Health, the home was purchased by BGH in 1999 and used as office space until recent years. 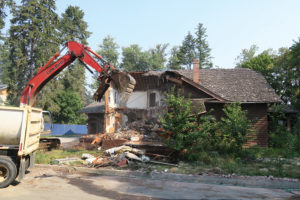 BGH CEO Sheryl Rickard wrote in a statement Tuesday that the home was never intended to be used as permanent office space.

“Bonner General Hospital purchased the Brown House and property in 1999,” Rickard wrote. “The house served us well for many years as office space and a beautiful conference room. However, it was never intended to be used as permanent office space since it was a residence and therefore created many challenges such as inefficient office space, no cooling system, and it was not ADA (American with Disabilities Act) compliant. We made the decision years ago that it was not prudent to put our limited funds into renovating the house to bring it up to code and to be ADA compliant and that we needed to put any available funds into patient care, equipment and technology upgrades. We are now in need of utilizing that property for hospital expansion.”

Rickard said a new building will be constructed on the property.

“The new building will be smaller and be able to be expanded in the future as needed,” she said. “Initially, it will house the new emergency power generator for the hospital.”

Relatives of the Browns confirmed they were able to access the property to salvage moldings and other materials prior to demolition.