When it comes the Canadian geese at Sandpoint City Beach, there’s no simple solution —or at least, not one that will please everyone. 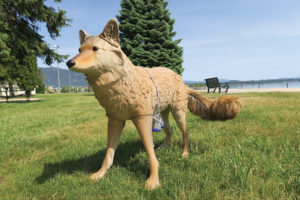 A previous deterrent method tried by the city of Sandpoint were the use of coyote decoys at City Beach. Photo by Ben Olson.

In February, the Sandpoint City Council approved a management plan for geese in local parks. A cooperative effort between the city, USDA Wildlife Services, Idaho Fish and Game and U.S. Fish and Wildlife Services, the plan involves capturing the birds while they’re molting and flightless, banding them for identification and relocating them.

That’s all well and good, but one possibility has some feathers ruffled. Sandpoint Parks and Recreation Director Kim Woodruff told council members in February that for the plan to succeed, birds that return to the park after relocation may need to eventually be euthanized.

“The action tonight is to relocate only, but I want to be clear and transparent to you and the public about my recommendations for long-term and sustained success,” he said in February.

Resident Jane Fritz believes the geese management plan is inhumane and unnecessary. At a council meeting Wednesday night, she urged the city to consider other options.

“Deterrents should always be tried before lethal means of taking taking a protected species are employed, as is the city’s plan,” Fritz said.

Fritz opinion is shared by some Sandpoint residents. But others, particularly those in the hospitality industry, believe the massive amount of fecal matter produced by the geese are a public hazard and a turn-off for tourists.

“In my experience the geese have been the most common complaint among the 9,000-plus people we check in,” said Dallas Cox of the Best Western Edgewater.

According to Woodruff, the city has also received frequent complaints about the mess Canadian geese leave behind. But he believes the plan approved by the City Council in February is the best chance of curbing the problem.

Prior to the relocation program, the city made several attempts at reducing the beach’s goose population. City officials set up coyote decoys, hired a dog handler and more, which helped to some degree. Beyond that, city workers made their best effort to clean up the heaps of goose poop left in their wake. But with geese flocking by the hundreds and each capable of producing two to three pounds of fecal matter per day, it proved a costly and time-consuming project.