The future of oil trains redux

A year ago in these pages, I wrote about a hearing in Spokane at which hundreds of inland Northwest residents protested the proposed construction of an “energy distribution terminal” (a facility for transferring fossil fuels from train cars to ships) in far-off Vancouver, Wash., near Portland. The trains that would provide this facility with oil would all come through Sandpoint, as well as through the other towns in the “funnel” that routes hundreds of trains from the interior through Sandpoint to Spokane. 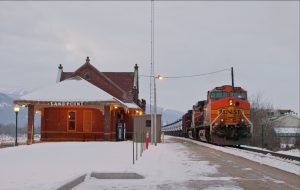 At that time, numerous terminals were in the works down the tracks from Sandpoint. According to a report commissioned by the City of Sandpoint, if all them were built, by 2022, we might see up to 20 trains/day of oil and another 63 trains of coal coming through town. We were concerned that their passage would cause air and water pollution and increased vehicle wait times at crossings (up to five more hours daily, according to the report). In addition, there was always the possibility of a derailment with associated contamination of air, land and water, as well as the risk of fire and even explosion.

In the intervening year, plans for most of these terminals have been scuttled. After numerous local protests at hearings like the one last January, many local governments have moved against the construction of terminals in their communities. Indian tribes’ assertions that terminals interfere with their fishing rights have also interfered with some of the plans.

But the decisions were also affected by a drop in market demand––and related prices––for coal and oil, which made the projects poor business propositions. In 2013, closer to when some of these projects were first proposed, oil was running close to $120/barrel. In contrast, by January of 2016 it hit a low of $28/barrel. In China––the primary market for coal to be exported from the proposed terminals––coal consumption peaked in 2013 and then fell for the next two years.

Although no one seems to have definitive counts of the number of coal and oil trains coming through town now, the general sense is that it has probably decreased. In addition, our ability to respond to a spill or derailment has improved, thanks to training and supplies provided by Burlington Northern Santa Fe last summer. We now have emergency responders trained to respond to a spill of hazardous materials on land and water, along with a trailer full of materials to get started in mitigating the spill. Both of these developments sound like good news.

But change is on the horizon. We’re about to inaugurate a new president who has promised to increase resource extraction jobs. Whether his administration is able to counter the headwinds blowing against coal and oil has yet to be seen.

Market movements within the past year may help him out. Coal prices more than doubled in the first half of 2016, although they began to fall again in November as a surge in domestic production in China helped ease shortages there. Oil prices had recovered to about $57/barrel at the close of 2016.  A shift of government support away from renewables and toward fossil fuels, along with these market movements, could make shipping coal and oil by rail more economically viable in the future.

So concerns remain about the number and safety of fossil fuel trains passing through Sandpoint. Last summer, a train full of Bakken crude like the kind we get through town derailed in the Columbia River gorge. Sixteen tank cars hopped the tracks, spilling 47,000 gallons of oil into the Columbia River. The cars that derailed in the gorge were the newer CPC-1232 cars that are theoretically safer than the previously standard DOT-111s, but three of them caught on fire and burned for 14 hours, and smoke from the blaze closed nearby Interstate Highway 84. The CPC-1232s are supposed to be replaced with cars that meet a new standard called DOT-117, but rail carriers have until 2025 to remove all the older cars from service. That leaves eight more years of opportunities for derailments and disasters.

Although our ability to respond to a spill is better than it was a year ago, we still have neither enough manpower nor enough materials to go beyond an initial response. If we had a spill like the one that happened at Mosier last summer, we would need to call in assistance from neighboring counties and states. The longer we have to wait for it to arrive, the longer a fire could burn, the more rail cars could be set afire, the greater the opportunity for an explosion, and the more pollutants could leak into our lake.

If train numbers increase again, extraction companies, rail car makers, and railroads stand to increase their profits. They have shown reluctance to limit these profits by investing immediately in safer tank cars or adding to shipping time by covering coal cars to limit the escape of pollutants. As their profits increase, is it fair for our community—and other communities down the funnel—to bear the increasing risks that come with their increasing profits?

Even if the answer were yes (and I don’t think it is), I continue to believe that if we are to invest in creating and distributing energy, we’re better off putting our efforts into renewables. Evidently our new president disagrees with me on this, so I’ll be watching.

It may be necessary to head to Spokane again.

Cate Huisman is a freelance writer and editor who lives and works in Sandpoint.