America has generated its fair share of heroes over its history; individuals who deserve celebration. 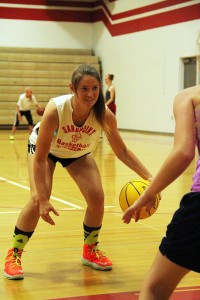 Breylnn Converse, pictured here coaching a children’s basketball camp at the Sandpoint High School gymnasium, is one of many high school students honored as this year’s Fourth of July parade grand marshall. Photo by Ben Olson.

It’s not just the frequently-praised individuals either—the great historic figures or the military men and women—that warrant recognition either, according to Judy Dabrowski of the Sandpoint Lions Club. Teachers, police, firefighters and students all do noble and selfless actions every day without recognition. That’s why this Independence Day, the community is rallying to honor heroes of all stripes.

“[The theme] is wide open,” Dabrowski said. “We hope people really think about it and come up with their own examples of everyday heroes.”

The idea of honoring unrecognized heroes extends to the selection of the parade grand marshal. In an unprecedented move, the Lions Club has picked not just one individual but the entire Sandpoint High School student body to serve in the honorary position.

Indeed, a large percentage of the student body plans to participate in the parade, according to teacher Erica Haynes. Members of the student council, National Honor Society, jazz band and several sports, dance and academic teams or clubs are all turning out to represent their group.

“I think it will be really fun for the kids because they’re being noticed by the community and the Lions,” said Haynes.

The high schoolers will enhance what is already a day packed with activity. At 9 a.m., the children’s parade kicks off, with kids trucking along on decorated bicycles (line up by 8:30 a.m. to ensure your place). Then the grand parade begins at 10 a.m., with sign-ins available between 7-9 a.m. Starting 2 p.m., kids’ games will take place at City Beach, and the talented folks at Creations will be paying a visit at 4 p.m. to paint faces. Meanwhile, music by Fiddlin’ Red and Moore Music will occur at 3 p.m. and 6 p.m. As always, fireworks start at dusk.

It takes a lot of work to make all those events fall into place, Dabrowski said. Planning begins in earnest at the beginning of the year, and Lions Club members vote to determine the year’s theme and grand marshal.

“The Lions Club has been doing this forever—50 years or more,” she added. “The planning process is pretty fine-tuned at this point.”

Independence Day events also require significant cash to get off the ground. Every year, Lions Club members raise money for the fireworks show— and parade. You can support the effort by buying raffle tickets to potentially win a John Deere Gator utility vehicle. Keep at eye out at North 40 on Monday, the Sandpoint Co-op on Tuesday, Wal-Mart on Wednesday and Saturday, Super 1 Foods on Thursday and Yoke’s Fresh Market on Friday to buy a ticket. The Lions Club can also use volunteers as they prepare for Independence Day celebrations.

“That was a biggie for us this year,” Dabrowski said. “It was the first time we did that, and it was wonderful.”