The Idaho Panhandle National Forests reported a handful of regional fires Tuesday, citing last week’s lightning storm as the cause of most recent fires. 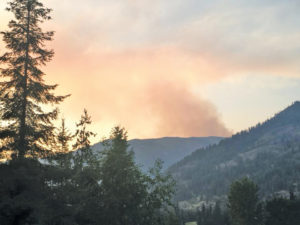 Smoke from the Cougar Peak Fire in Clark Fork on July 30. Photo by Nancy Cheslic.

The Cougar Fire, a 100-acre blaze in the Sandpoint Ranger District near Porcupine Lake, burned in steep terrain. Smokejumpers were dispatched, but they disengaged Tuesday due to safety concerns. IPNF reports manmade and natural features are being used to confine and contain the Cougar Fire.

A 300-acre fire in the Bonners Ferry Ranger District was also being actively managed Tuesday. Known as the Smith Creek Fire, it was lightning-caused and burned mostly subalpine fir and shrubs, according to IPNF. The Slide Creek Fire, also in the Bonners Ferry Ranger District, reached 10 acres Tuesday and consisted of logging slash on private ground.

A small fire started in the Priest River Experimental Forest early this week as well, known as the Tarlac Fire, and was quickly contained.

A number of smaller fires populated the Coeur d’Alene River and St. Joe Ranger Districts following the storm as well. The three-acre Surprise Creek Fire, located south of Faset Peak on a ridge between Surprise and Ermine Creeks in the Independence drainage, is a low-intensity fire. However, IPNF reports that smoke from this fire may be highly visible from Highway 95 around Athol and other communities such as Lakeview, Bayview and Hope.

Though temperatures are forecasted to drop in the coming days, winds combined with dry conditions mean fires are likely to spread and new blazes might start. IPNF emphasized that firefighter safety is top priority, and that fires are being engaged in the safest manner possible.

At this time there are no fire restrictions in place. However, IPNF said visitors should be reminded to be careful while recreating in the forest. The only way to know a campfire is truly out is to touch the ashes with your bare hand before leaving it unattended.

For more information on fire activity in the Idaho Panhandle National Forests, contact 208-557-8813.